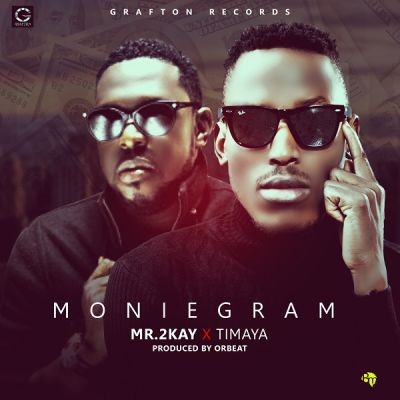 Grafton records is proud to present the official version of “Moniegram” by Mr 2Kay featuring Timaya.

This highly anticipated track has been released, based on the widespread industry support by top Nigerian celebrities in the likes of Don Jazzy and others on the slogan created by Mr 2Kay ‘’I No Come Lagos Come Joke” – a phrase/lyric from the new song.

Mr 2Kay, who is still riding high in the industry with his last single “Who No Like Better Thing” ft. Jonsers, recently won the award for ‘Best Collabo’ in New York at the just concluded NEA 2015 and has also been nominated in two categories ‘Best Collaboration’ and ‘Best Dancehall’ at the forthcoming HEADIES 2015 for his hit song “Bad Girl Special Remix” ft. Cynthia Morgan and Seyi Shay.

“Moniegram” was produced by Orbeat and assisted by Ayzed. The track talks about being focused and about the business of making money. Mr 2Kay and Timaya joined forces on this one to get us thinking and dancing.