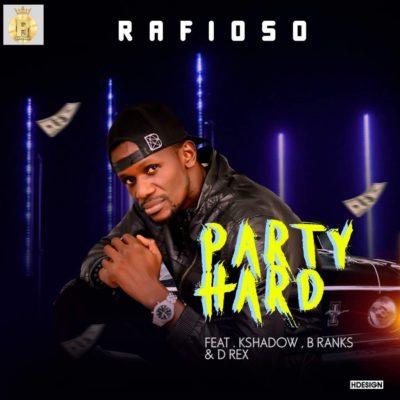 PJ Records is starting the year wiht a club banger, they have proven themselve to be a force to reckon with in the Nigeria Music Industry once more, as they introduce “PARTY HARD” in style.
Just as we are yet to digest the hot and blazing RAFIOSO’S “GANGSTER” track which features “IDRIS ABDULKAREEM”, the label has released another hot and blazing party starter from RAFIOSO.
This one is titled “PARTY HARD” with dope delievry from the multitalented K SHADOW and B-RANK.
This powerful song that showcases strength and vocal was first released at the Billionaires Mansion in Dubai last night, as we couldn’t help but notice various billionaires grooving to the song.
One that captured so many hearts, was the world famous American celebrity and KYLIE JENNER’S boyfriend “TYGA”, who was seen dancing to the song and also had a few words to say about the song.
He kept saying  “PARTY HARD” and I’m sure this simply meant that he enjoyed the song.
One needs to give kudos to RAFIOSO for making this super hit single possible, with the support of the ever ready PJ RECORDS CEO.
Get ready to update your playlist as party hard hits the club tonight. Come on people, let’s go party hard.