Previous: These Are The 10 Hot Nigerian Songs Trending On Charts & Airplay 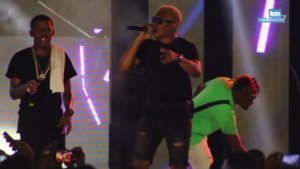 Reminisce’s performance at Small Doctor’s “Omo Better Concert” last Sunday didn’t go all that rossy as the crowd did threw things at him so he could leave the stage.

The fans while Reminisce was performing expressed their displeasure when it seemed the “King of boys” was overstaying his time on the stage. They then felt the only way to get him off the stage was to throw things at him so he could cut short his performance.

However that didn’t deter the “Kako bi chicken” crooner as he continued his performance and dished out some of his hit songs.