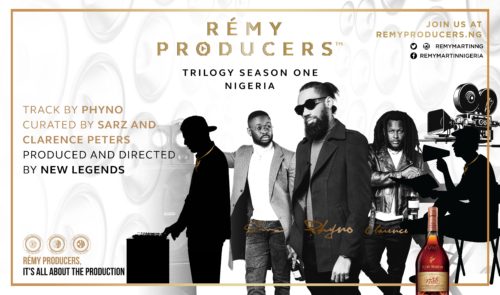 Aspiring Music Producers Will Compete for a Co-Sign to Create Nigeria’s Next Hit Song & Video.

Following five successful seasons of the competition in the US, premium cognac, Rémy Martin is excited to introduce Season 1 of the Producers Series – an impactful music platform designed to discover and celebrate budding music producers and video directors in Nigeria.

Behind every chart-topping hit or film is the craft of a producer and a director. They take the risks, make the tough calls, and help build other talents. Demanding both fearless leadership and impeccable collaboration, becoming a creator is one of the most difficult journeys in show business.

Rémy Martin believes that success is best achieved in a collaborative manner and the brand will continue to provide a platform to spotlight and elevate emerging talents in the music industry. With the help of 3 notable names in the Nigerian music industry, the Producers Series is offering unsung visionaries the unprecedented chance to break through to the big leagues and get the legendary co-sign.

The renowned producer competition will be giving two talented individuals the opportunity to get their ultimate break in the music industry by working on a track produced, directed and curated alongside chart-topping music producer, Sarz, award-winning music video director, film maker and cinematographer, Clarence Peters with ace rapper, singer, songwriter, record producer, Phyno laying down the verses.

Speaking on the competition, chart-topping producer, Sarz, noted that the power of mentorship cannot be overstated. It guides people to make fewer mistakes on their journey to success. He adds: “This is why I started The Sarz Academy, and partnering with a big brand like Rémy Martin on this campaign will definitely allow me to expand on this and reach more people.”

In his words, rapper and singer, Phyno, says, “Working with Rémy Martin on this project where I can mentor young and upcoming talents and share advice on how to get to the top and even work with them. I don’t think there’s any other brand appreciating creators like this.”

“Success is a legacy. The mindset that you have, your philosophy; cannot pass on from generation to generation without mentorship. For me, I am big on Legacy and heritage that’s why I chose to be on the campaign with the Rémy Martin team,” said Clarence Peters.

Rémy Martin continues to champion the many talents and creative genius of music producers by bringing together both established and developing artists in the spirit of collective success.

“RÉMY MARTIN LAUNCHES “RÉMY MARTIN PRODUCERS SERIES” – SEASON 1 IN COLLABORATION WITH “SARZ”, “CLARENCE PETERS” AND “PHYNO””, 5 out of 5 based on 1 ratings.