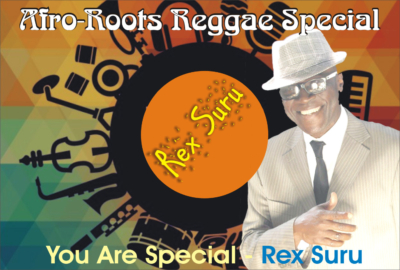 For those who think reggae must is losing its steam, there is a genuine article in town known as Rex Suru, Afro-Roots reggae creator, who has just released two hot singles, to remind us all that reggae is nowhere near being dead.
Rex Suru, born Olisuru Ogunniyi released the two singles, namely; ‘African woman’ and ‘You are special. Unlike most contemporary songs of today devoid of message, Rex’s lyrics are laden with soul-stirring messages, be it a message of love, Africa unity, equality and what have you.
With ‘African Woman’, Rex explores the sexuality of the ‘African Woman’, celebrating her values, and bringing to fore the special attributes a man must appreciate and celebrate. In ‘You are Special’, Rex is simply telling all races and tribes of the world they are special, while championing the course that no tribe is superior to the other.
Rex Suru is a US-based Nigerian singer, songwriter, and composer of note. With his band, the Cherubim Vibes, he has become the quintessential voice for Afro-Roots Reggae. Combining the rhythmic West African Afro-beat with West Indian reggae skank, his songs are all original compositions.
Suru began his amazing musical journey in the San Francisco Bay Area. In 1999, he was ranked #3 in World Beat Music.
Since then, he has produced an outstanding catalog of inspirational music. At its core, his music expresses spiritual, social, and political themes. Drawing upon his influences by such artists as Bob Marley, Jimmy Cliff, and Peter Tosh. Suru’s essential message is “Unity of All People.” Be sure to watch him and the Cherubim Vibes delight, inspire, and shake up the crowd at various venues throughout the United States in 2017.

Rex Suru – You Are Special