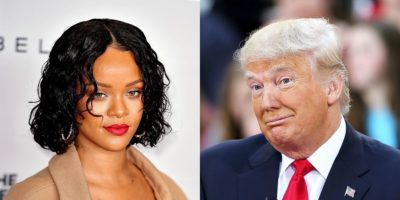 Superstar US song diva, Rihanna has expressed her anger at her song being played at “tragic” Republican rallies and vows that she will make sure any of her songs is never played at such events. Rihanna declared this via her twitter page.

Not for much longer…me nor my people would ever be at or around one of those tragic rallies, so thanks for the heads up philip! https://t.co/dRgRi06GrJ

Rihanna is not the only musician to have expressed her displeasure over her song being played at the Trump rally as over the weekend veteran musician, Pharell threatened to sue the American president for having his song played at his rally.