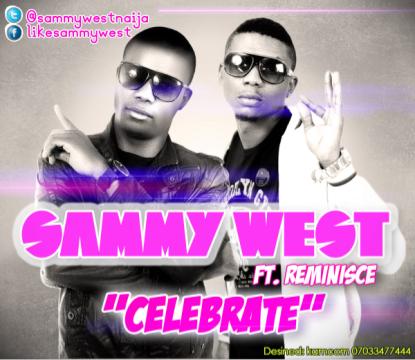 Nigerian Pop sensation Sammy West drops a Single featuring the King of the Street Versatile Rapper Reminisce who gave us Kako bii Chiken, a viral song we are just recovering from its dancisickness. Celebrate is a catchy tune dedicated to all the beautiful ladies all around the world! Sammy West with full names as Ajanaku Sanmi Ebenezer comes from the Ijesa tribe of the South Western Part of Nigeria. He broke the radio silence with his Hit Single Mosunmola few years ago, now its time to celebrate with this brand new single produced by Rythm.

Sammy West, a South African based Nigerian Artist drops new Single with the Nigerian Versatile Rapper Reminisce, Just as if we won’t recover from the Kako bii Shicken Virus, this song is an lovely celebration song. He dropped his first single titled Mosunmola in 2010 before heading back to South Africa as an undergraduate at Ladoke Akintola University of Technology, Ogbomoso studying Computer Science and Engineering. He has worked with Numerous Nigerian Artists and Producers like Kzeek, Timi Roberts, Kue Bounce, Rythm, Femi Odewole, Fliptyce and to mention but a few.Expect more from this amazing Naija voice!