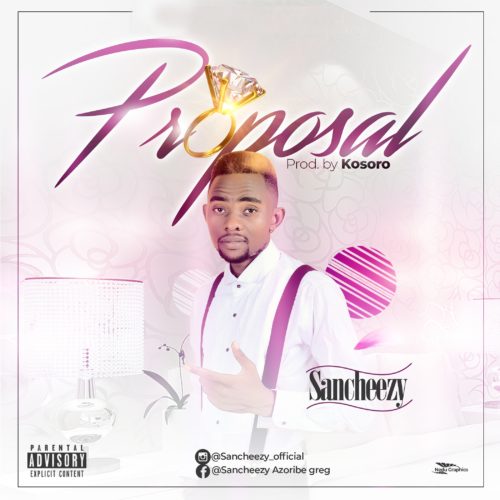 Yes! Yes!! Yes!!! Music is life and whenever you need a sensational and cool rhythm to rock your body, “PROPOSAL” is always next to you for download. Proposal is a very lovely and smashing hit single that has gotten into the heart of the entertainment lovers, clubs, weddings and other events in the eastern part of Nigeria and presently under a well organized promotion to obtain awareness all over the nation and the world.

Proposal was crooned by a young vibrant Artist by name, Azoribe Ugochukwu Greg popularly known as Sancheezy. He hailed from Enugu, had his primary school knowledge at the University Primary School, Nsukka in the year 1997 to 2002 and then proceeded to the Model Secondary School in the same town, 2002 to 2008. After his secondary school, he got admitted into the Institute of Management and Technology IMT, Enugu, in the year 2008 to 2013 and served the nation as a Youth corper through 2014/2015.

Sancheezy started off his career singing and dancing at six (6) years old. He got attracted and influenced by music at St. Theresa Catholic Diocese, Nsukka at that tender age. Sancheezy joined the choir at St. Brigid Asata, Enugu in his higher institution days and claimed till this moment music has been something irreplaceable.

Sancheezy is always ready to inspire and light up the world with his own voice and music and as you all have it right now, hit the download button below after listening to the music through the music player and kindly leave a comment if Sancheezy is however related to J Martis and P Square in term of his inspiration