Saying South African Rappers Are Killing Us Is A Super Lie; Vector To MI Abaga 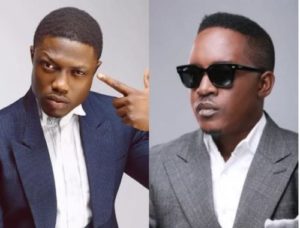 Vector says it is disrespectful for his colleague  MI Abaga to say rappers in South Africa are doing better than their counterparts in Nigeria.

On his 2017 song, ‘You Rappers Should Fix Up Your Lives’, Abaga had complained that his fellow rappers were under performing and were not putting out songs that were up to standard.

He rapped on the song: “None of you rappers is real enough/ once you blow up now you’re switching up/ that’s why these fans are not feeling yall/ SA rappers are killing y’all”, These lines are the lines that vector tags as ‘Disrespectful and Super lies’.

Vector went ahead to say; “You can call rappers lazy, wack, you can call them any thing you want, I will stand by it anytime any day, don’t come and wash your dirty linen in public” on an interview (superstar Wednesday) with Cool FM OAP Do2dtun.

(WATCH) @vectorthaviper reply to the question on MI’s song “RAPPERS SHOULD FIX UP THEIR LIVES” … no holds barred! ?on #SuperstarWednesday with @therealenergygad x @kemismallzz ?? (Part 2)

(PART3) WATCH) Vector: “IT IS VERY DISRESPECTFUL” @vectorthaviper reply to the question on MI’s song “RAPPERS SHOULD FIX UP THEIR LIVES” … ?on #SuperstarWednesday with @therealenergygad x @kemismallzz ?? (Part 3) .. Punchlines in all direction…