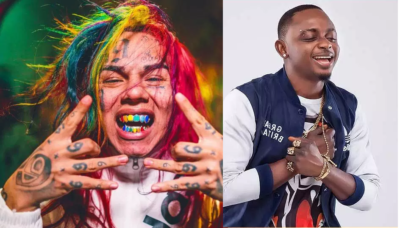 Could this be a season of copyright saga for Nigerian artistes? Fresh from the issue between Danny Young, Tiwa Savage and Wale Turner that patrolled the internet over the weekend, Sean Tizzle has now come out to publicly accuse an artiste of copyright theft.

Sean Tizzle through his Twitter account has come out to accuse American rapper; Tekashi 6ix9ine and his team for stealing the title of his incoming E.P, “Dummy Boy.”

The “Shole” crooner said in as much as they already had a “gentleman’s agreement” concerning the title, they still went ahead to release 6ix9ine’s album which is titled “Dummy Boy.”

Sean Tizzle however took the opportunity to call out American artistes, he said what they do best is to steal from Afro-Beats artistes.

Nigerian artiste, Sean Tizzle, calls out American artistes after 6ix9ine stole from him

Meanwhile, there were reports yesterday that Tekashi 6ix9ine’s album has been leaked. Although It has not been ascertained as to who leaked the album, but people are surely going to be pointing accusing fingers to Murda, one of the producers that worked on 6ix9ine’s album as he revealed last week via the social media that he has the album and that should he leak it.

“Sean Tizzle Calls Out 6ix9ine For Stealing His Forthcoming EP Title”, 5 out of 5 based on 1 ratings.