See Shocking Moment US Singer; Chris Brown Begs Rihanna To Drop New Music After Being On Break For Few Years

The internet has just gone into some sort of eruption as the most unpredictable, unthinkable and amusing of music events just happened.

American superstar -songstress; Rihanna, posted a sultry-sexy picture of herself on Instagram few days back which really got a massive following as almost every music lover took to the page to drop comments upon comments, begging for music to be dropped by the singer. 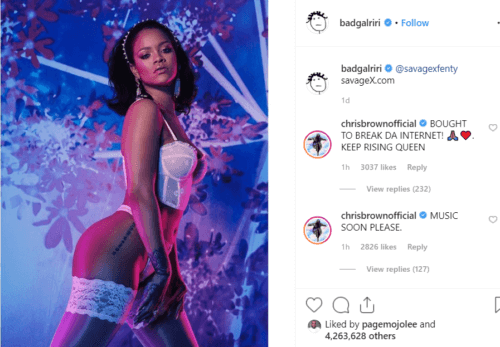 Chris Brown’s comments have caused a lot of confusion among music fans as a lot of them are finding it really hard to fathom why the father of one has crept in to drop a comment asking for Rihanna to drop new music.

Could it be that in all honesty, Breezy misses the songstress behind the mic? Or could it be that he’s trying to bring to the fore again one of his bad boy antics to have him get back on beautiful Rihanna’s good looks?