The relationship between Davido’s manager, Asa Asika, and DJ Cuppy continues to wax strong as the couple were recently caught exchanging banter on social media.

Out of excitement, Asa Asika tweeted about Pepsi endorsing two of clients, Davido and DJ Obi, celebrating the successes his PlugNG imprint has recorded but DJ Cuppy came out of nowhere to comment on his post, reminding him that his girlfriend got signed up by the pet drink company as well. 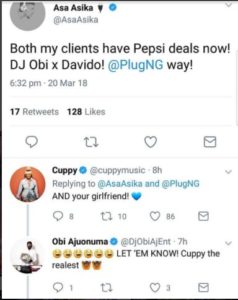 “DJ Cuppy, Davido’s Manager Are Rated Best Nigerian Celebrity Couple”, 5 out of 5 based on 1 ratings.