Should Cuppy Continue With Singing Or Stick With DJ? 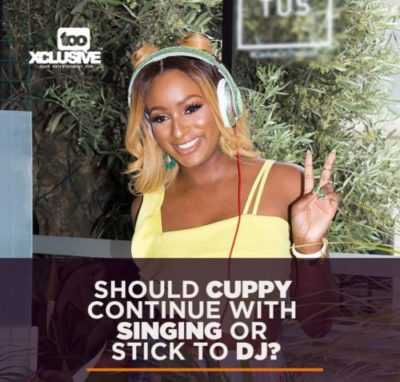 International DJ and Producer Florence Ifeoluwa Otedola popularly known as Cuppy came into the music industry with her disc jockey skills and mind blowing mixtapes. She won the minds of lot of people with her status and dj skills which gave her loads of love and attention as a female DJ.

Last year the female DJ, Cuppy released her first single ‘Green Light’ featuring Tekno, which turned out to be a successful and major one for her. After Green Light she went further with the release of ‘Vybe‘ featuring Ghanaian heavy weight, Sarkodie and this also added more credit to her name.

Recently she released another single with L.A.X titled ‘Currency‘ and barely 2 month after she dished out and new single ‘Werk‘ featuring talented duo act ‘Skuki’ alongside a colourful music video and time appearing as Cuppy.

We at Too Xclusive would love to know the fans opinion on Cuppy’s singing side, if she should continue or rather remain with her DJ skills?. Share your thought below