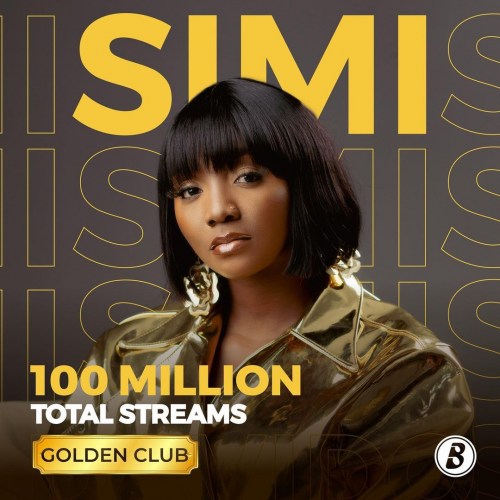 Nigerian singer-songwriter, Simi has recorded a gigantic feat as the first female artiste to reach 100 million total streams on Boomplay. The #1 music streaming and download service recently made the milestone announcement on their social media pages.

Hot off of the success and reception from her recently released 5th solo project ‘To Be Honest’, Simi is reckoned as one of the prominent and leading voices shaping the new wave of Afropop sound flooding both local and international music charts.

With 100 million streams on Boomplay, the multiple award singer, Simi, records another major career milestone, that furthers the celebration and representation of women breaking boundaries and leading trail blazing achievements in music.

Commenting on this milestone, Tosin Sorinola, Director of Artiste & Media Relations, Boomplay, shared that “Boomplay is dedicated to amplifying voices and ensuring inclusion and representation in music. As an organization, we will continue to recognize and celebrate the strides made by women globally.”

Simisola Bolatito Kosoko, better known by her stage name Simi, started her career as a gospel singer, releasing her debut studio album in 2008, titled Ogaju, she also recently played as one of the top judges in the season 7 of Nigerian idol 2022.

Since her last full-length project in 2019, the Nigerian singer has achieved a top 5 record on the Billboard World Album Chart, an MTV Africa Music Award nomination, amongst other accomplishments, including this latest streaming milestone.

You can listen to Simi’s new project HERE

Adekunle Gold And Simi Join The Tattoo Gang, Ink Beautiful Messages For Each Other

“Don’t Take Your Toddler Anywhere If You Still…” – Simi

Simi Thanks Philadelphia Fans For Waiting Despite Over 10 Hours Delay