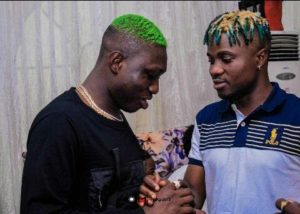 Danny S has come out to issue a stern warning to Zlatan Ibile after the latter tweeted about using new dance, Zanku, to “fade” formerly trending song, Shaku shaku.

The new dance, Zanku, which was introduced by Zlatan has been trending for sometime now and this has caused many music fans to shift their attention away from Shaku Shaku. Zlatan who said he has used Zanku to “fade” Shaku shaku on a new track with Burna Boy, “Killing Dem,” tweeted the same lyrics on his twitter page, and that now seems to have angered Danny S.

Danny S, who sang 2018 street banger, “Ege” has now come out to debunk the claim by Zlatan and said Shaku shaku should never be compared to Zanku as the former is greater.

Which do you think is bigger, Shaku shaku or Zanku (Leg work)?