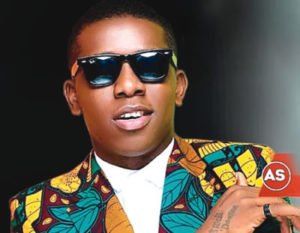 Singer, Small Doctor was arrested in Lagos on Friday by the Lagos State Police Command along with some other guys for illegal possession of firearms and also for reportedly threatening to shoot a policeman on duty.

Lagos State Police Commissioner; Edghal Imohimi, made this revelation while Small Doctor and the other guys were being paraded by the police.

The commissioner said; “It was alleged that some unknown men, four of them, in an unregistered green SUV had brought out a gun and threatened a police man that if he does not leave the road, they will shoot him.”

“Believing that they were armed robbers, i sent out my men and fortunately, with the DPO in charge of Shogunle division, they were able to intercept them and the men were arrested and were brought to the headquarters for interrogation.”

“It was then discovered that one of them is the same Small Doctor. They were arrested in possession of a functional rifle, cartridge and some of their personal belongings.”

The commissioner further went on to reveal that Small Doctor has once been involved in a similar situation as there was a time he fire a live ammunition at the Agege Stadium on the 27th of November, 2018 and that he is currently under investigation for that offence.

He said, “Small Doctor was arrested and taken to the CID for questioning. He was alleged to have fired a gun, the pellets from the gun injured four people who were rushed to the hospital.”

He however said Small Doctor will face the law. In his words,he said “Small doctor will be charged to court for prosecution.”

This could be a serious blow for Small Doctor and his fans as he has a concert coming up later this month at the Agege Stadium tagged “Omo Better Concert,” this mess he has gotten himself into could threaten the manifestation of the show.