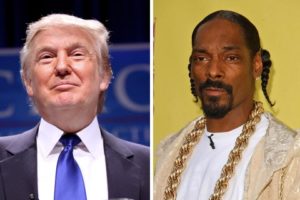 Snoop Dogg has been extremely vocal about his displeasure with Trump. The Long Beach rapper has taken aim at the President of the United States and his supporters on numerous times, both on wax and on social media.

The government shutdown is Snoop’s latest beef with Trump. The rapper took to social media to share a hilarious video condemning the president for his actions.

Snoop Dogg thinks anyone who works for the government and decides to vote Trump in again is plain stupid. The rapper shared a video on Instagram telling anyone working for the government to rethink who they’ll be voting in for president of the US in 2020.

“All you people [working] for the federal government not getting paid right now, ain’t no fuckin’ way in the world you could vote for Donald Trump when he come back up again,” he said. “If y’all do vote for him, y’all some stupid mothafuckas. I’m sayin’ that to y’all early. All you federal government people that’s not being paid, that’s being treated fuckin’ unfairly right now — that’s so terrible and this punk mothafucka don’t care.”

Snoop Dogg continued to urge the people to refrain from voting for Donald Trump once the government shut down is over. Before ending his video, Snoop sent one more message to Trump and his supporters: “So fuck him too. And fuck everybody down with Donald Trump.”