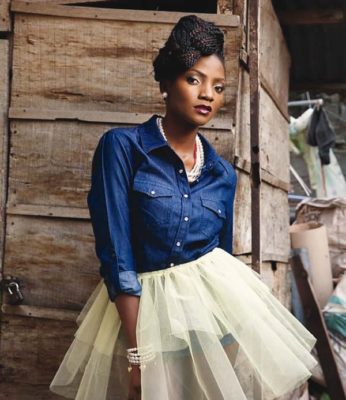 Singer, Simi recently made a revelation in an interview with PUNCH’s Sunday Scoop. In the interview, she revealed that she originally owned the popular song, Soldier, which was released by Falz. The singer said she had she started working on the song but Falz heard it, liked it and so they both worked on it together. The song went to become a fan’s favourite, winning two awards at the 2016 Headies awards, in the category of Best Collaboration and Best Nusic Video of the Year.

In the interview, Simi broached the widely discussed subject of her relationship status, confirming that she is in a relationship but refusing to disclose her partner’s name because she prefers to keep her private life out of public space.

“I always like to keep my personal life away from the public. All I can say is that I am in a relationship but I just don’t want to disclose the person’s name.”

The singer went on to talk about her association with Falz  and Adekunle Gold. One of these two artistes is rumoured to be her partner but the singer refused to confirm or debunk the rumour. Instead, she talked about how she met the two artistes.

“I met Adekunle Gold while I was performing at an event centre in Lagos. Unknown to me, he had been listening to me since I was a gospel artiste and he said he was a fan of my music.

At that time, I just knew him as a graphic artist, popularly referred to as the ‘King of Photoshop’. I didn’t even know he was a singer, but we just became close from there.

As for Falz, he heard one of my works, and he reached out to me on Twitter. From there, we hooked up in the studio and did some things together. Soldier was actually my song, and when he heard it, we decided to work together on it.”