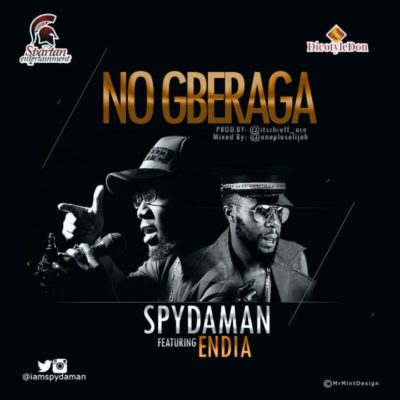 The EP which has songs like “Telephone Lies” that features Cynthia Morgan and the ever green song “African Woman” has been long awaited by his fans and followers after the release of the album “No Bi Dream” in 2009 with songs like Egwu (make una dance) ft Timaya.

NO GBERAGA is a song which preaches to people not to get too comfortable of their immediate achievements but rather they should work harder as they give all glory to God.

Spydaman who is now the current Chairman of PMAN CRS Chapter, expresses his deepness and his maturity as he consciously sends home this message while Endia of Grip Musik fine tunes and beautify the song with pleasant melodies and lyrics.. it’s Eccentric and unique , it’s Conscious , it’s High Breed , it’s Funky , it’s African , it’s Mystical , its Commercial, it’s Good Music, it’s dancehall and pure mash up.

The song was produced by fast rising producer Chief Ace , Mixed and Mastered by Oneplus.