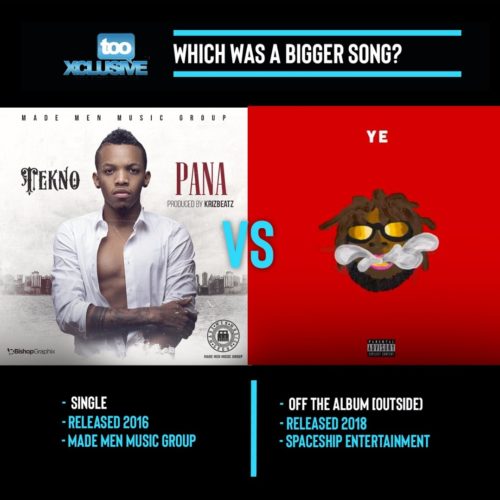 “Pana” till today remains Tekno’s biggest song, he released the song in 2016 and was in no doubt the biggest song of that year. “Pana” after its release, became a major song not only in Nigeria but Africa and won Tekno a lot of awards. “Pana” will definitely be up there as one of the biggest afrobeats songs ever produced.

However, just two years after, Burna Boy came with the biggest song of 2018, “Ye.” This song was off Burna Boy’s “Outside” album but became a monster jam like it was released as a single. “Ye” like “Pana” did to Tekno, won Burna Boy loads of awards and established the singer as an “African Giant,” the song travelled far & wide and became an anthem for almost everyone.

We understand that both songs are great in their own way, but an argument has erupted over here as to which is the bigger song.

Some think it is “Pana” while others feel “Ye” is bigger and this is not making us arrive at a dead end. So in order to put the argument to bed, we have decided to seek you guys’ opinion on the topic; “Pana” VS “Ye,” – Which is a bigger song?

Nifemi is a graduate of the University of Lagos. He's a unique user of the pen when it comes to the expression of whatever. He is editor-in-chief of the organization and also a writer of news, articles, editorials and a lot more to help expand the level of knowledge of the readers and simultaneously have them entertained. A lover of music and football is who he is and a Man Utd die-hard.
Submit your comment
60 total pingbacks on this post
Learn More