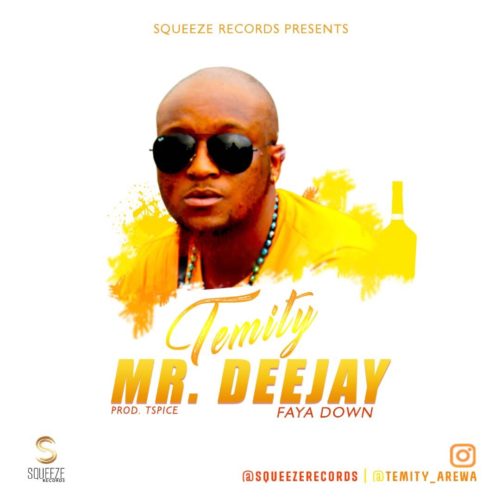 Squeeze Records presents Temitope Olubodun popularly known by his stage name Temity, a recording artist, song writer and entertainer based in Lagos. Temity is a native of Ile Ife, Osun State, born in Niger State. He grew up in Lagos, moved to Jos at some point in his life and back to Lagos. He is a graduate of History and International Studies fromUniversity of Jos, Plateau State but music has been his passion from childhood.

Temity started his music career at a very young age in the church choir where he started developing his skills in music and entertainment. He started music professional in 2011. In the course of his music career he has worked with many known producers and artist like of Masterkraft, Chop Stix, J-Slicky, T_Spize, Pheelz-Mr-Producer, Dj Coublon, Magnito and many more. He won the very first Notjutsok theme song competition in 2011. He continued pushing relentlessly in hispassion for music until he was spotted by Squeeze Records in 2016 where he landed a deal with the label.

Temity got signed to Squeeze Records in 2016 as a songwriterand content manager until 2018 when he landed yet another deal for recording artist due to his undeniably unique vocals and sound.

Temity is here with his first single under Squeeze Recordtitled “Mr Dj (Faya down)” produced by T-Spize. The song is out on all download and streaming platforms.

Kindly follow Temity on social media @temity_arewa on all platforms for more info.