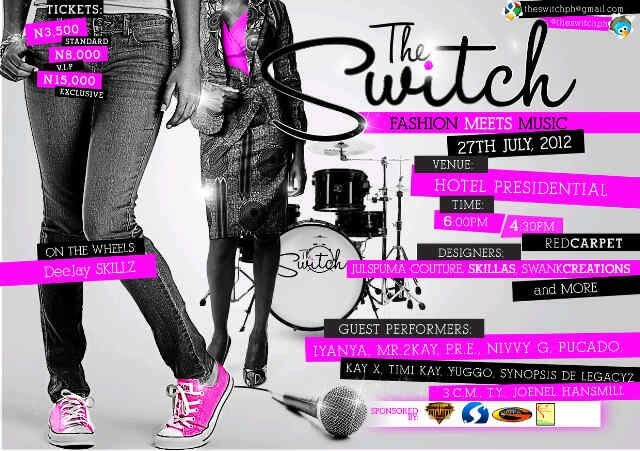 The Switch Charity is a non-profit organisation with an aim to support charities and charitable causes by raising funds through entertainment events. Founded in 2012, The Switch Charity with the help of its founding members Adonye Apiafi, Angel Adukeh, Beatrice Porbeni, Chima Aguma, Kioba Briggs, Maro Malaka and Mazino Malaka, who are Nigerian youths based in the United Kingdom, organised its maiden events – The Switch…Fashion Meets Music and Ball for Charity.

The Switch…Fashion Meets Music event was held at Presidential Hotel in Port Harcourt on the Friday 27th July 2012. It was a platform for local artistes to showcase their talent & perform alongside bigger names in the entertainment industry.  Some of the artiste performances of the night included Iyanya, P.R.E, Mr. 2 Kay, Timi Kay & Kay- X, Yuggo and more. Fashion designers at the event included Skillas, Julspuma Couture, Swank Creations and Cool Beans.  The following day, Saturday 28th July 2012, the Ball for Charity event took place at Brookstone Secondary School, Port Harcourt. This event was a football tournament featuring 8 Teams who paid a fee to participate and play to raise funds for a chosen charity/cause. 50% of funds raised from the football tournament participating fee plus funds raised from the The Switch…Fashion Meets Music event  were donated to a charity/cause (selected by the team that won the football tournament) and the remaining 50% was price money for the winners of the football tournament.  The winner of the football tournament chose a charitable cause to support people living with HIV/AIDS.  On Saturday 11th August 2012, The Switch Charity accompanied by some performers at the Fashion & Music show, the captain of the team that won the football tournament and well wishers visited the University of Port Harcourt Teaching Hospital to show support for people living with HIV/AIDS. (Pictures of the donations day excluded photos of patients to protect their privacy).

The Switch Charity plans to continue what it has started – organising more creative events to support charities and charitable causes.

Photos from the event are on the link below: https://www.dropbox.com/sh/8tyyq7vsxodpccc/ZrR7bYDT9p