These Are Wande Coal’s Best Song Ever… Agree? 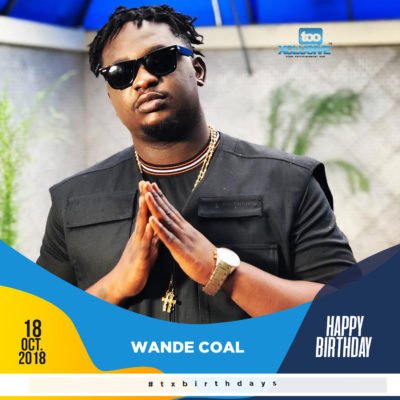 Famous Nigerian superstar singer; Oluwatobi Wade Ojosipe, popularly known as Wande Coal was born on the 18th of October, 1985 in Lagos Island, Lagos, Nigeria. Wande Coal started singing as a teenager in church and eventually got noticed in the Nigerian music industry first as a dancer, before his music talent was spotted later on by Don Jazzy who then signed him to Mo’Hits Records in 2006.

Wande Coal released his first single; “Ololufe” under the label. That single got him to stardom, and in 2009 he released his first album; Mushin2Mohits which catapulted him to super stardom. Since then, he’s dropped blazing hot songs, won numerous awards and was also not immune to controversies (Baby mama and record label scandals).

So today being the 18th of October happens to be the superstar’s birthday and as our own way of celebrating him and 10 years of staying relevant, we have decided to highlight our best 10 songs of the singer since he broke into the industry back in 2008 to 2018. Check the list below:

Worthy of note are; “Iskaba”, “Kiss Your Hand” (Ghana Frestyle).