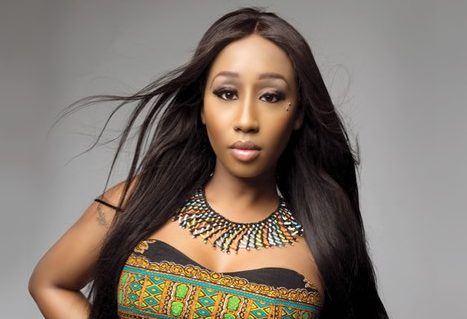 After throwing heavy shots at Tiwa Savage in her own version of Kizz Daniel’s trending song; “Fvck You,” that stormed the internet yesterday, Victoria Kimani has once again put on her diss gown (maybe she never put it off any way).

She has not dissed any artiste or industry colleague this time around though, but it still centres indirectly around a music artiste and once again it’s Tiwa Savage. She hasn’t dissed Tiwa but this time around her fans. It appears that after dropping her controversial “Fvck You” challenge yesterday, Tiwa Savage’s fans stormed her page to rain abuses on her and also threaten her.

She made this known after Seyi Shay (another female who was accused of throwing shots at Tiwa savage in her own cover of the “Fvck You” challenge) went into her comment section to reveal she’s been getting loads of lashing from Tiwa Savage’s fans who take thier time to slide into her DM on Instagram.

Seyi wrote; “Queen Kimani…im getting a lot of imps and reps popping up in my comments section and i cant deal. Its making me cringe. I mean look at the profile pics of these people! Its scary! They look like desperados… whats going on??? Like…i just woke up 4 God’s sake. Are we still on dis mata? Abeg.”

And in a response to Seyi shay; Victoria kimani threw shades at Tiwa’s fans, she said, “Scary as hell girl…Damn…. pouring out so much hatred like their grandmother.”

However, Tiwa savage is yet to respond to Kimani’s diss song and it would be interesting to know what her returning remarks would be like. 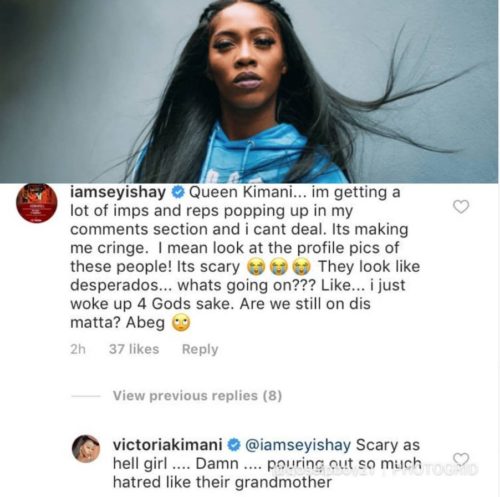