Those Who Warned Me About Wizkid, Now Kiss His A** – Mr Eazi

Mr Eazi has lashed out at ‘fake people’ who tried to mislead him when he became an associate of Starboy, Wizkid.

The ‘Leg Over’ crooner revealed certain people tried to convince him otherwise when he decided to be an associate of Wizkid and his Starboy Worldwide music label. The Detty boy said those people are now trying to ‘kiss Wizzy’s ass’.

Although, Eazi is not signed to Starboy, he revealed in a previous interview that he and Wizkid are business associates who are working towards championing the ‘Africa to the World’ music campaign. 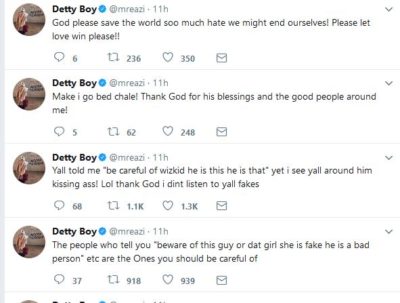