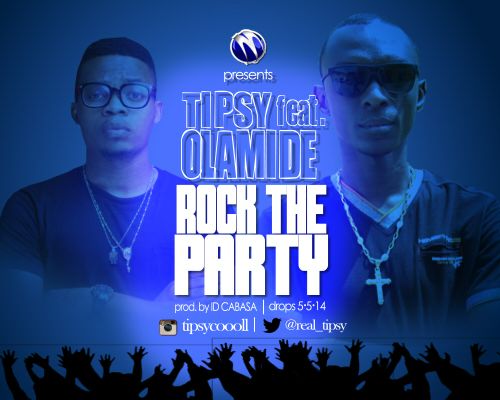 Not to be confused with OluwaTipsy the female artiste, this is Tipsy [real name – Tope Cole], an On-Air Personality and a song-writer of the male gender; having worked with the likes of Freestyle, Frenzy and Ex-O, he returns with a follow-up single as he lays claim to that much coveted name. Back in the month of October in the year 2012, the singer released a single titled “Girl On Point”, which featured Yemi Alade and Hakym [Lamba King]; the year 2014 sees him with a come-back single which was recorded a year ago but stays pertinent with the sounds of today.

Featuring YBNL Nation’s very own Olamide who drives home his Rap verse as usual, Tipsy unveils his newest single titled “Rock The Party” which sees him flaunting his singing acquisition and creativity over a Techno Dance tune sporulated by the veteran hit-maker, ID Cabasa; as stated, this song is being released to the general public for their listening pleasure a year after it’s recording and as would be seen, it’s uniqueness fits in with time as music lovers are sure to have this on their playlists for a while.