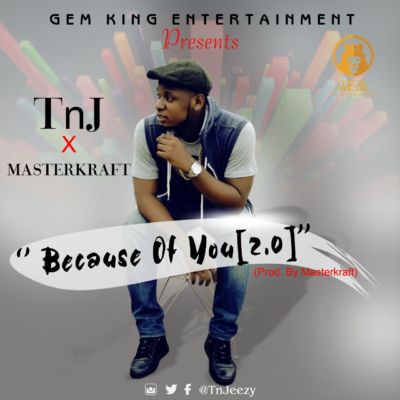 Gem King Entertainment is proud to present their flagship artiste, the impeccably God-centered rapper, TnJ and his new single titled BECAUSE OF YOU (2.0). It features vocals from a master at his craft, the legendary Masterkraft who is also responsible for lacing such an exhilarating instrumental.

TnJ, aka The Gem King, has pieced together a lovely tune in honour of God’s relentless involvement in his life and in the life of those around him. He is thankful to God for such a wonderful year so far, and as such, decided to put out this offering on this special day, which happens to be his birthday. It might also be pertinent to mention that Masterkraft also released the 1.0 version of this material on his birthday as well. The song was mixed & mastered by the very capable Doc-Side for Doc-Side Theatres.

While this would serve as the second material off TnJeezy‘s LION’S DEN project, we anticipate & are confident that he would be churning out nothing but good music before the year comes to a close.