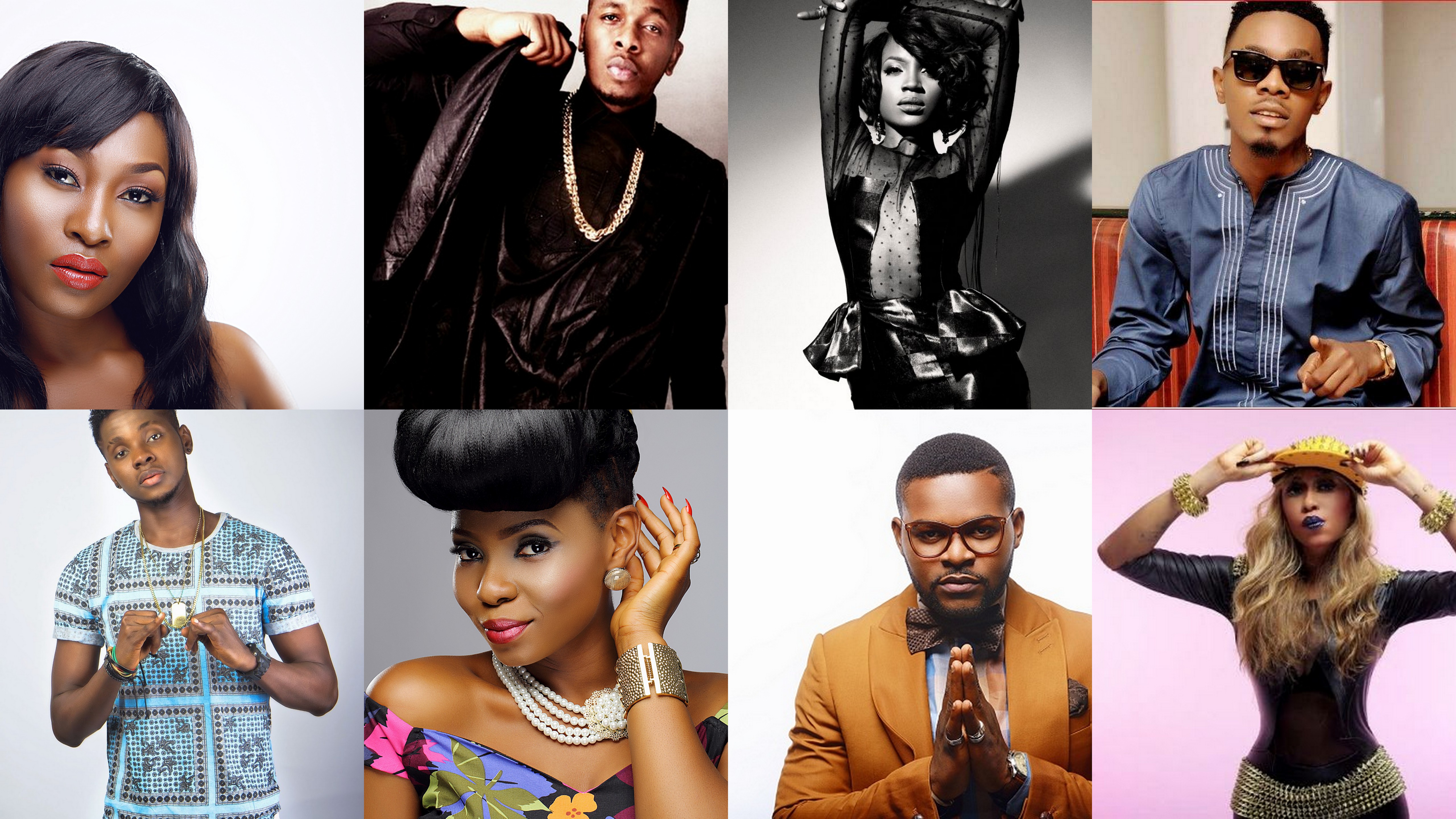 Taking a vivid look at 2014, the year had its fair share of surprises, heavy flops and break-out stars. As a fresh music calendar commences; music enthusiast and P.R expert Ogaga Sakapide [ @Ogagus ] has compiled a list of fast rising and buzzing artistes, that music followers and the general public at large should watch out closely for, to ensure they’re not caught off guard;

Cynthia Morgan would have had a mega 2014, if her team had allowed her high-life fusion single “Don’t Break My Heart” peak instead of drowning it with the brilliantly sexy visuals for “Lead Me On” quickly followed by the attention demanding “I’m Taken”.
Nonetheless the versatile Cynthia Ikponmwenosa Morgan is the female to watch in 2015; armed by Jude Okoye’s “North Side” record label, her impressive stagecraft and performance antics. Miss Morgan might just shock many and become the top afro hip-hop/dancehall female artiste in Africa if caution is not exercised. We should also not forget her current buzzing single “Popori” and her acclaimed contribution to iLLbLiss’ track “Jamo”.

The utterly underrated Falz who released a studio album supported with numerous music videos in 2014 started getting recognition and gaining a massive fan base towards the end of the year. The lawyer/musician was responsible for the #MarryMe trend on Instagram which was created to promote his Yemi Alade and Poe assisted smash hit single “Marry Me”.
Thanks to the acclaimed visuals for “Marry Me”, Falz is becoming a titan in the industry. At the rate, the lyrical and witty Falz The Bahd Guy will shock many in 2015. Previous hit tracks from Falz include; “High Class”, Wazup Guy” etc. Please go and get his album “Wazup Guy: The Album”, you will be impressed big time.

Young! Handsome! Talented! Hit Song! Rich Record Label! All these reasons make newcomer Kiss Daniel a top contender in the year 2015 and a promising music career. Kiss Daniel’s single “Woju” is taking over the country and receiving massive airplay, so it is was not shocking when he enlisted the services of Davido to give the track the remix treatment which is yet to be released.
If the cards are played right, this new comer might just be the break-out music star of 2015 like Sean Tizzle or end up as just another lucky artiste with a mammoth-sized hit track like Slyde. Kiss Daniel has already set the pace for 2015.

Lil Kesh’s “Shoki” rocked 2014 to say the least, his single celebrating the street dance bullied Orezi’s “Ijo Shoki”, the Burna Boy led “Shoknorris” and ended up as the most accepted track affiliated to the dance thanks to the mega remix which featured Davido and Olamide and the undeniable influence of his label boss Olamide.
Kesh went on the impress music critics with “Lyrically” and scored numerous high profile performances like the Channel O Music Videos Awards and the 2014 Headies Awards.

Patoranking is the new dancehall poster boy, rising to the top of the musical food chain with hit numbers like “Girlie ‘O” (Remix)” featuring Tiwa Savage and the street motivational anthem “Alubarika” featuring Timaya.
Pato might have won the highly coveted “Next Rated” award at the 2014 Headies Awards but we fear that he might be another victim of the dancehall longevity curse which plagued previous dancehall titans Shank and General Pype.
The Foston Music front-man’s latest musical offerings “Happy Day” and “Daniella Whine” keep gaining momentum but is yet to cause a frenzy, nonetheless much is expected from him, so he’s one to keep both eyes on in 2015.

“The Rookie of the Year” winner at the 2014 Headies Awards, Reekado Banks is known for his melodious voice and smooth dance moves. Born Solomon Ayoleyi Hanniel, Banks was first introduced to music followers with the dance-hall inspired “Turn It Up” which featured his label-mate Tiwa Savge and went to steal hearts with his vocal contribution on Mavin Records’ hit tracks – “Dorobucci” and “Adaobi”.

Signed to Mavin Records which is arguably the biggest record label in Nigeria, the “Chop Am” crooner is expected by music enthusiasts and fans to unleash a number of Don Jazzy backed hits in 2015.

The soulful vocal pipes of Jos native Ruby Gyang is almost superhuman! That said; Ruby who is signed to Loopy Music has been putting in work and it paid off when her tribute track, (to her late dad) “Good Man” gave her much needed recognition and bagged multiple award nods, including two nominations at the 2014 Headies Awards as well as securing her numerous high profile appearances and performances.
It is very safe to say we see Ruby rising to the very top as far as the genre of soul is concerned if she remains consistent; she has promised an extended play backed with more hot visuals in 2015. Please go consume her previous singles, “Okay” and “Down”, they are collector’s items

Credited to be the writer of Davido’s smash “Aye” and blessing music lovers with “Gallardo” and “1980” not-forgetting his contribution to the mega collaboration “Emergency”, Eric Manny’s front-man Runtown is on his journey to the apex of musical stardom and chart domination.
Runtown’s new continental single “Banger” which features South African music team Uhuru keeps gaining momentum and hopefully will rock Africa on 2015.

Seyi Shay is not a new name and has done very well for herself, but now that Mavin Records first lady Tiwa Savage is pregnant all eyes should be locked on the crazy bossette.
Groomed by Beyonce’s father and having moderate hit tracks like the shinning “Irawo”, the Wizkid assisted “Crazy” and the ragga influenced “Murda” (with vocal contributions from Patoraking and Shayde), not-forgetting her amazing performance skills. Armed with her tongue-wagging music video for “Crazy” and a Hollandia Yogurt endorsement deal, Seyi Shay ended 2014 on a strong note so it is only expected that she modulates in 2015.

All hail the “King of Queens”! As predicted; Yemi Alade soared to unexpected heights in 2014, from bagging a MOBO Award nomination, performing in numerous countries across the globe, releasing a debut album, to her video for “Johnny” gaining over 11 million views on YouTube, to sealing an endorsement deal with Baracdi Breezer and so on.
In 2015; she has already inked a juicy endorsement deal with toothpaste brand Close-Up and featured on “Marry Me” by Falz which is arguably the biggest collaborative track in the country at the moment. The energetic Effyzzie Music diva is expected to reign supreme seeing that Mrs. Balogun will be on maternity leave in 2015.