Previous: What Do You Think About Ycee’s New Look? Fresh Or Trash? || Watch Video 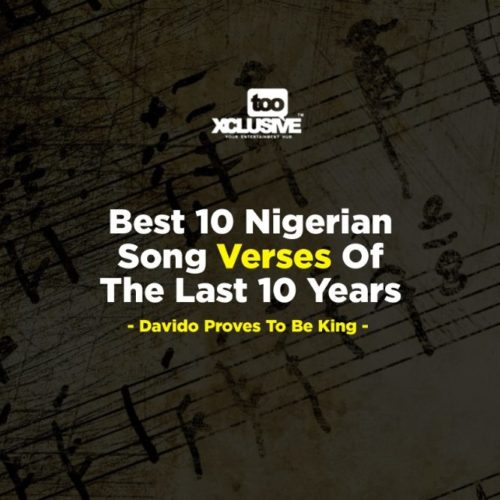 There are a few things that make up the beautiful end-product of a song. The artiste, the chorus, the verse, the production and a lot more.

All these things put together in the best possible way are what determine the beautiful effect the song has on listeners. However, of all these parameters, we would be dwelling briefly on the verse which is what this publication is about.

We would be highlighting below the best 10 song verses in the last 10 years in the Nigerian music industry. These verses are the hottest and most popular song verses among music fans and one that excite a lot during live performances.

See the best 10 Nigerian song verses of of the last 10 years:

Nifemi is a graduate of the University of Lagos. He's a unique user of the pen when it comes to the expression of whatever. He is editor-in-chief of the organization and also a writer of news, articles, editorials and a lot more to help expand the level of knowledge of the readers and simultaneously have them entertained. A lover of music and football is who he is and a Man Utd die-hard.
Submit your comment
16 total comments on this postSubmit yours
Newer Comments →