Top 10 Singles That Rocked The First Quarter of 2015 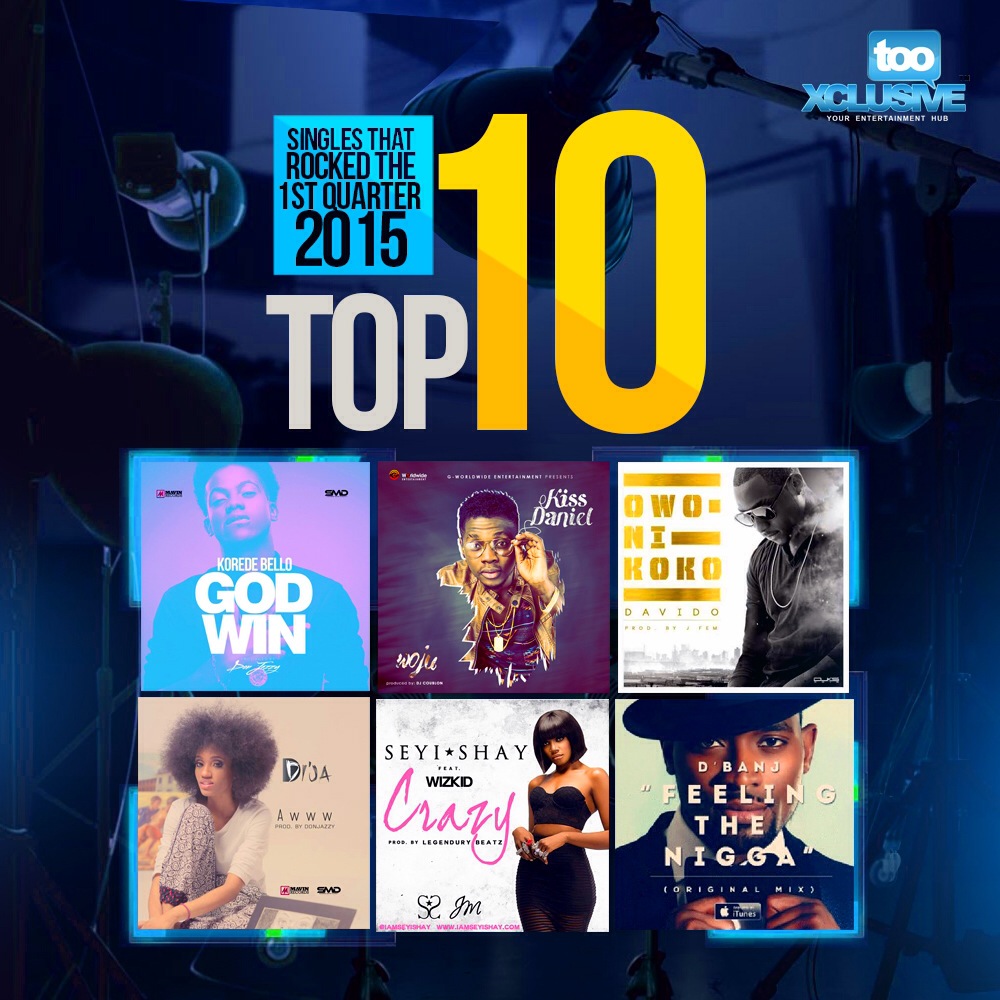 With bigger expectations for the entertainment year this 2015 which will result in spanking new collaborative features, album releases, tours and not forgetting the joy of parenthood; the Nigerian music industry no doubt will continue to trail blaze in it’s record breaking feats achieved.

The high influx of songs daily has made it difficult to maintain a shortlist of trending songs. Regardless, some have pulled through solely by popular demand and flavor. These are 10 singles that rocked the music charts this first quarter of 2015.

The YBNL crew is one label that has grown so enormously and in so short a time. When you have streets king and baddo, Olamide steering course on the ship then you know you’re in for one helluva trip. Shoro Niyen features the talented artistry of Olamide, Lil Kesh, Viktoh and their newest recruit, Chinko Ekun. The title is a Yoruba saying which suggests in meaning to be ‘not making sense’. Olamide leads the pack as they all give their expository takes on issues that do not necessarily ‘make sense’. Mr producer, Pheelz was responsible for the likeable beat and sounds just like other breaking singles from the YBNL camp.

Since the emancipation of Shay on the Nigerian music scene, Deborah Joshua has continued to seal her ‘bossette’ status with every new track churned out. Seyi Shay who enjoys an envious vocal chemistry with industry colleagues including Patoranking, Sound Sultan and Timaya, picked on afro pop-star Wizkid to power her latest upbeat single Crazy. The Legendury Beats produced joint clearly expresses her desire for some crazy damn good loving and in her usual fashion, she burns things up slaying with her mezzo soprano.

The entertainer businessman, D’Banj had one of the most looked forward to releases of 2014 after when video snippets had surfaced on the blogosphere showing himself and Konvict Music lead act, Akon in a studio recording session. Feelin’ Tha Nigga was the end result of that collaboration and copyright controversies couldn’t stop us from bumping to the heavy jam. D’Banj who had had a most rosy 2014 from endorsement deals to writing and performing the soundtrack for the biggest grossing black movie of the millennial era, ended the year on a high note and we were feelin’ him for sure. Production credit goes to DeeVee.

This is unarguably the strongest joint on the sixth studio album of Africa’s well-celebrated singing duo, P-Square. It includes the use of carefully expressed lyrical rhythms while featuring producer genius, Don Jazzy who drops some impressive melodies on the hook as well as the vamp. Collabo is directed at members/party of the opposite sex (particularly female) and is a slang substituted for the English word ‘relate’ as used in the musical context. The tuneful nature of the track allows for a showoff of the uber popular dance style – Shoki, making a decent approach with it’s jollof music genre. Produced by Oscar Herman-Ackah.

Talk of groove and you can bet on it that super producer, Masterkraft is always sure to deliver in his exceptional fashion. Like some people have a special craving for the popular meal, Indomie, Olamide likens it with an urge to dance (to his music). In his signature style, he drops a couple hot flows on the hook using the Yoruba dialect and still allows room for rapper, CDQ to exhibit some of his indigenous bar-spitting genius too. Masterkraft whose love for hard kicks and the floor tomb is boundless, packed enough torque in the percussion to not only get us on our feet but also keep us grinding to the beat.

Starboy Wizkid is one superstar whose rise to fame has become all too familiar with ardent fans and supporters of his movement. Off his second studio album AYO (Joy), is Ojuelegba – a strip down of his rise and rise to being the acclaimed biggest export from the shores of Africa that he is today. The tale of a successful man’s hustle is a summary of what this particular track sought to explain and it carries with it, a bold message of hope, belief and being… in what every man desires to be. Produced by Legendury Beats.

Isn’t it aptly fitting when the self-titled Omo Baba Olowo sings about money? Davido had a most inspiring and award winning year in 2014. It’s undecided if he was implying that money made it possible but even the ordinary man from a society like ours can attest to the power of money when it’s in abundance. Owo Ni Koko is better than just doing a dance. It speaks to the commoner especially and allows him a little over three minutes to be happy and dare to dream big in that temporary state of utopia. Davido certainly thought this one through and you’ve just gotta love love love this song! Produced by J Fem.

Hadiza Blell aka Di’Ja definitely set our affection on-point balance when she vocaled on Dorobucci with lines like ‘Doro-bad, Doro-007’. She however dealt an unusual but quite unique take on Awww, a track sampled on afro beat elements playing out her phileo emotions in a boundless show. The concept of the title is such that the nature of the musical instrumentation – heavily stringed, electric riffs, horns and soft percussion with her airy alto spun into harmonies induces the effect of the whimsy sound. Very beautiful tune produced by Don Jazzy.

Continuing it’s winning streak would be Kiss Daniel’s breakout single Woju, which was recently given the remix treatment featuring OBO, Davido and heavily pregnant Mavin first lady, Tiwa Savage. Woju’s melodies have not only germinated but have continued to resonate in the hearts of many music lovers across the African continent and the globe at large. Daniel’s success with Woju has strengthened the beliefs of many up-comers like him that they too can make it. Produced by DJ Coublon.

At the number one spot, is Godwin from Mavin’s up and coming act, Korede Bello. Backed with vocal aids and production credit from Don Jazzy, Bello treated fans to preachy high life/dance inspired single at the beginning of the year. The afro-house tune included lyrics that typical Nigerians could very well relate to and even doted a bit on the national elections that were most looked forward to. Bello and Don Jazzy improvised with some staccato adlibs that added a smooth sensational feel to the song. Since na only God-win, it’s not so much a wonder that he clinched the first position.