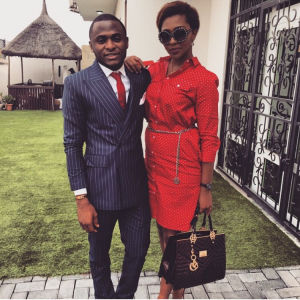 For those who have been peddling rumors of a relationship between President and co-owner of Made Men Music Group, Ubi Franklin and Emma Nyra, the only female artiste signed under the record label, you are dead wrong!

As of now, the Calabar born artiste manager is officially off the market following his proposal on Thursday March 19, 2015 to girlfriend, Nollywood actress of Clinic matters fame, Lilian Esoro who of course accepted. Ubi’s proposal is coming months after Lilian caught the bouquet at the wedding ceremony of her friend and colleague, Matilda Obaseki.

According to reports, the MMMG boss and Lilian had been dating since 2014 but kept their relationship under wraps till now when their mutual friend Freda Francis, let the cat out of the bag by posting a congratulatory message to the newly engaged couple on Istagram with a picture of the engagement bling captioned:  She said YES @lilianesoro. Congrats @ubifranklintriplemg @lilianesoro. What God has joined together, Let no MAN put asunder!!! #proposal

Congrats to them! Inyanya you’re next!!!

Emma Nyra – For My Matter