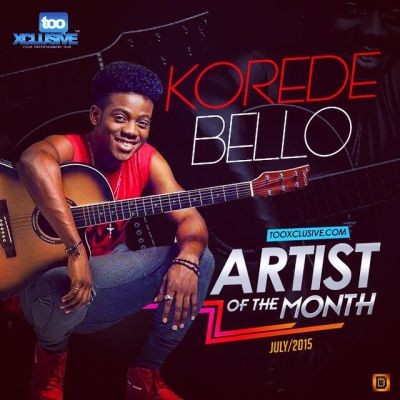 tooXclusive unveils afro music sensation and self-acclaimed ‘doro mega superstar’, Korede Bello as the “Artiste of the Month” for July 2015.

Sometime ago, Korede expressed his sentiments over being referred to as an upcoming artiste. For those of you who probably didn’t know, Bello isn’t exactly new the the Nigerian music terrain. He grew up being a child of many talents with interests in music and dance. At the age of 7, he had started taking up stage roles while teaching himself the music art of playing instruments. By that time he was 13, it dawned on him to begin tailoring a career path in music after he found a silver lining there.

His diehard attitude paid off immensely when he got announced by music maestro, Don Jazzy as one of the new acts signed to Mavin Records. He has since then risen to deserving fame with singles like African Princess, Cold Outside and his massive hit, Godwin which is still buzzing nationwide. Prior to this feat achieved, he had garnered impressive rep with vocal cuts on the label’s singles including Looku Looku, Adaobi and especially Dorobucci where he pulled the mega superstar title from. Bello is also an award-winning artiste and some of them include Most Promising Act To Watch (Nigeria Teens Choice Awards 2014), Youth Revelation of the Year Music (Ping Naija Awards 2014), Most Promising Artist (Top Naija Music Awards 2012), Afro Pop Artist Of The Year (Top Naija Music Awards 2012), Best R&B SINGLE (Male) (Yem Awards 2012), Most Wanted Artiste (Hype Award 2012), Indigeneous & Revelation of the Year (Tush All Youth Awards 2011) and Most Promising Young Act (Toks Entertainment Awards 2011).

When Bello isn’t busy making sweet music, you can find him lending his voice (person) to projects that seek to better the world populace. He can be linked with a couple non-profit organizations tied to cancer awareness, charity, and patriotic campaigns simply because he has succeeded in promoting an image that perfectly explains his life’s philosophy, which resides in standing only for what is right. Similarly, his social media fan page “Bellovers“ is a means to connecting and appreciating his fans for their unwavering support and loyalty; something he likes to do without reservation and with relish. Until we can find another description that aptly fits, Korede Bello remains our poster (boy) for the popular saying ‘big things come in small packages’!

“Looku Looku” with The Mavins

“Adaobi” with The Mavins