Previous: These Lyrics Are Definitely Why I Like Nigerian Songs… Or Perhaps NOT! 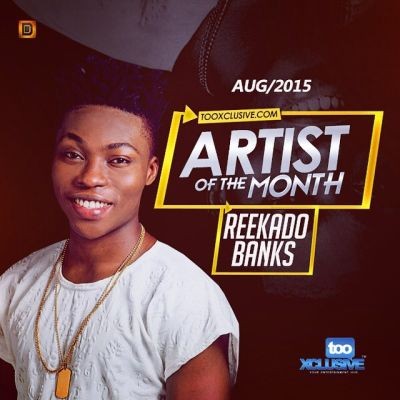 Reekado Banks is tooXclusive’s “Artiste of the Month” for August 2015.

Before we started to know him by the popular alias, Ayoleyi Hanniel Solomon aka Reekado Banks had featured under the stage nom ‘Spicy’. Although his materials were worth a fair chance, the big break never came until his brother entered his materials for an online talent search competition hosted by Mavin Records executive, Don Jazzy and this was even done without his knowledge or approval. It turned out to be a daring move that paid off immensely as he got selected out of 5000 other entries.

Since getting activated to arguably Nigeria’s biggest record label company, the Supreme Mavin Dynasty, Reekado’s first official single ‘Turn It Up‘ which featured the label’s diva, Tiwa Savage was the first of such songs to cast an actual spotlight on this aspiring songstar. While many compared him to a new generation Wizkid (which perhaps came too early), the rest of us saw an uber talented and versatile artiste who had so much to offer, finally at the beck of unleashing his potential magic. He heightened our excitement with his hook on the then new national anthem ‘Dorobucci‘ and an impressive verse on ‘Adaobi‘. Reekado most definitely was on a winning streak and by the time ‘Chop Am‘ was released, it was safe to say we had made up our minds on who was going to bag the award for 2014’s Rookie of the Year, which he coincidentally now won at The Headies, same year.

Reekado has barely taken a chill as he has gone on to feature on so many other songs; this is a feat that cements his Next Rated status. Attesting to this fact would be his recent endorsement signing with telecommunications giant, Glo Nigeria. Never has a rookie artiste been signed only a year into prominence but Reekado was the first amongst others to blaze this trail and the reason(s) are all too clear for us to see, without a doubt. Reekado has promised to keep doing it for the fans, meaning there obviously will be more songs, more videos, news updates & stuff that tooXclusive will be on ground to bring to you first. Thus, we’re enjoining us all to stay excited for what’s coming.

“Looku Looku” with The Mavins

“Adaobi” with The Mavins

“Turn It Up” feat. Tiwa Savage