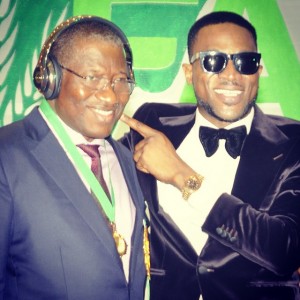 D’Banj was at the launch of the Youth Employment In Agriculture Programme (YEAP) by His Excellency, President Goodluck Ebele Jonathan in Abuja.

At the event, the music star presented the President with a specially designed edition of his customized Beats by Dre headphones. 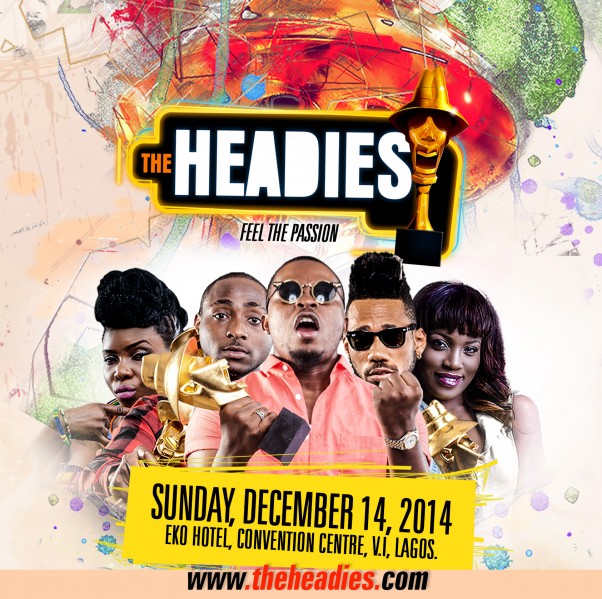 Didn’t attend the Headies… and you also missed the telecast? Awwwwn!

Not to worry, here’s a review or better yet complete rundown of what went down at the event…

Give it to the headies anyday, they can’t be found wanting when it comes to packing a roomful of stars; a glitterati of stars graced the red carpet from the likes P-Square, Davido, Mavins, Toolz, Eva Alordiah, Julius Agwu & his delectable wife, Dakore, Skales, Kwam1, Pasuma, Victoria Kimani, KCee, the list is endless (Read more). 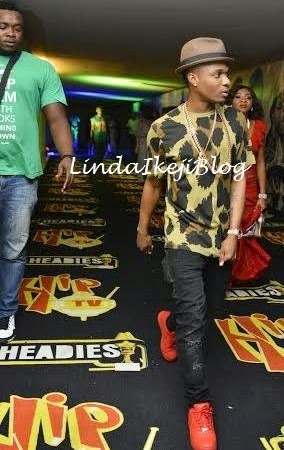 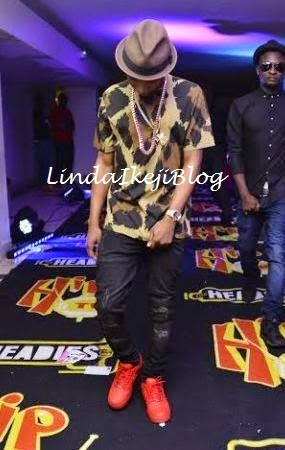 Contrary to what popular blogger, Linda Ikeji reported about Wizkid walking out of the Headies yesterday “in anger”, a story she backed up with photos, the Jaiye Jaiye crooner has debunked such tales.

Although he didn’t deny walking out of the event, the music star debunked rumors of him leaving in anger as reported because no table was reserved for him. (Lemme break it down) Wizkid did come to the event and yes he arrived late, totally understandable as he had 6 shows over the weekend during which he performed in Port Harcourt and Lagos. He was reported to have left the Headies after getting into the hall discovering that no seat had been reserved for him. Wizkid was seen alongside Shaydee as they left the event together.

Clearing the air via his social media pages about the rumored bad blood, Wizkid said, “Reports making rounds is I walked out of the Headies “angry”.. I respect the Headies and its organizers nd no I didn’t…“. He also backed the Headies following criticisms that the award was poorly conducted saying, “It’s not easy doing shows like that in Nigeria with little or no sponsorship so let’s give that credit to the “Headies” for always doing it…”.

He further congratulated Davido, Olamide, Patoranking and the other winners of the night….. 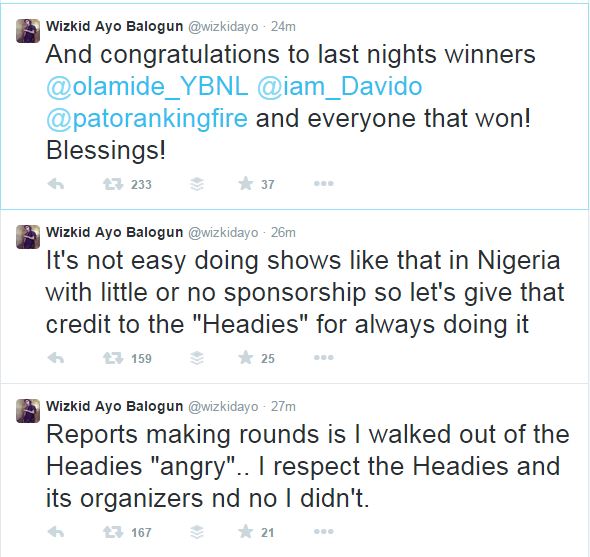 PHOTOS: Celebrities at the 2014 Headies 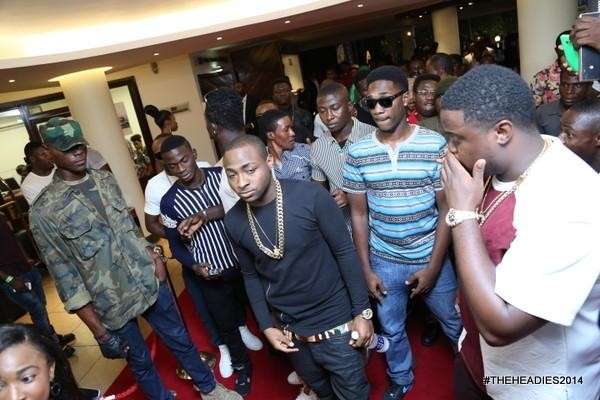 Celebrities didn’t not fail to bring IT at the just concluded 2014 Hip-Hop World award, also called The Headies.

Check out what your favorite celeb wore here 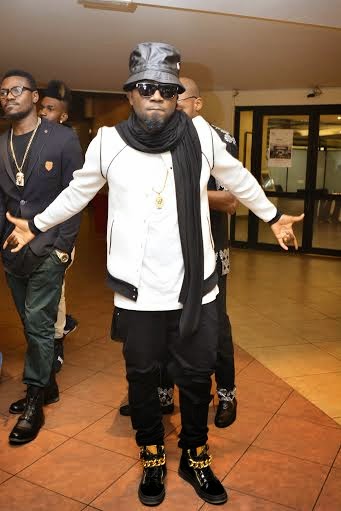 In an exclusive report by blog site that1960chick.com, Nigerian rapper Ice Prince, is well on his way to becoming a brand ambassador for D’USSE, a brand of cognac said to be rap mogul, JayZ’s top choice as far as cognacs go.

It’s no secret Jay Z’s drink of choice these days is D’USSE cognac.

Jay has publicly endorsed D’usse for two years now, he even raps about it on wifey Beyonce’s smash hit Drunk In Love when he said “That D’USSE is the sh*t if I do say so myself” and famously poured it into one of the three Grammy awards he won in 2013.

And now it looks like Ice Prince is about to join him to endorse the premium French cognac. Multiple sources have told me that the rapper is being snapped up to become the brand ambassador for the premium VSOP.

Jay Z’s cousin & Roc Nation Executive Briant “Bee-High” Biggs was recently in the country as a representative of the brand to finalize the deal between D’usse and Ice Prince’s reps. I haven’t been told the exact sum the deal is worth but it’s a LOT…nice early Christmas gift for Zamani.

Ice Prince’s reps could not be reached for a comment.

“I Once Sold Rat Killer…”, Headies Next Rated winner Patoranking 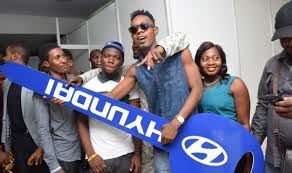 From his performances to his nostalgic clothing, Patoranking, real names Patrick Nnaemeka Okorie was full of energy and excitement at last night’s headies awards. The young chap is no doubt determined to get to the top and nothing, not even a mere stage that almost landed him on his arse would stop him from getting there.

His has been a not too smooth journey, nonetheless the time for struggling is clearly a thing of the past. Asides taking home the Best Reggae/Dancehall single for his Girlie O’ remix with Tiwa Savage, Wizzy Pro’s Emergency featuring Skales, Runtown and Patoranking fetched them the Best Collabo award. To seal the deal, Patoranking also won the highly coveted Next Rated award beating the likes of Runtown, Orezi, Yemi Alade and Skales.

It was during his acceptance speech he revealed that he once sold rat killer….. “When I sang ‘When I moved from nothing to something, that is my story‘, I meant it. I would like to say something, 2 years ago, I was living in a one room apartment, now, I’m living… somewhere around…….”, he said.

With a total of 3 wins for the night, the ‘Alubarika’ singer also went home with his Next Rated prize, a Hyundai SUV. 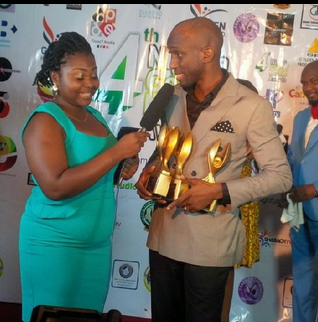 Nigerian inspirational singer, Obiora Obiwon was the man of the day at the 2014 Nigerian Gospel Music Awards which held on Sunday, December 14, 2014 at NECA Events Centre in Ikeja, Lagos.
The event, hosted by Gospel music act, Segun Obe, saw Obiwon smiling home with 4 awards in the Best Collabo, Best Soul RnB, Worship Song of the Year and Album of the Year categories. At the event, a minute of silence was observed for late gospel music star, Kefee who passed on to the great beyond in June 2014.