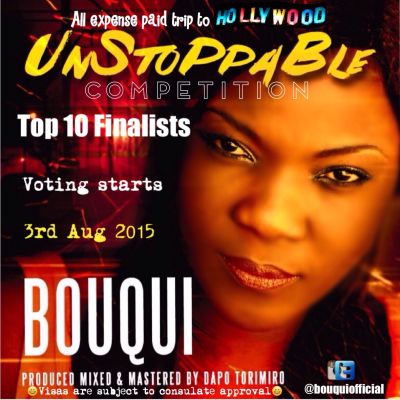 The Unstoppable Rap competition by foremost rap empress “BOUQUI” and Nigerian – American based producer “Dapo Torimiro” hit the ground rolling few weeks ago and it has been so astonishing at the level of lyrical competitiveness, fierce delivery and attention it generated from across the world.
However, having taken in hundreds of entries from within and outside the country, it is so touching that only 10 talents out of the thousands discovered will make it to this concluding part which will eventually produce the three (3) Unstoppable artists with the X Factor.  But while we unveil the 10 finalists for a three (3) day voting contest that commences from Monday 3rd/Aug to 11:59pm 6th/Aug, (Wednesday night), please be alerted that the poll will only cover 50% of the decision while the judges retain the right to the other 50%. We would also like to say congratulations to everyone that participated! And also to give props to those entries that really made it extremely difficult for the team picking the Unstoppable10, You guyz are fantastic and are all WINNERS!!!
Finally as you cast your votes, remember the eventual winner wins an all expense paid trip to Hollywood, California, USA and a one-song production deal with multiple awards winning Dapo Torimiro featuring BOUQUI. The 1st runner up also gets an all expense paid trip to feature in the Unstoppable video to be shot in Atlanta Georgia, while it will be 500 American Dollars cash price for the 2nd runner up.
Here are the 10 finalists…
CHEE – Z
ANGELOHS
GAHZAHR
TNJ
GR8MAN
LIMOBLAZE
STEVERAWD
FIZZIKAL
JUIVY
KATANA
Check @BOUQUIOFFICIAL @MUZIQGLOBEMEDIA FOR VOTING
Note: Incase of Visa decline, it will be 1500 American dollars, a production with Dapo and featuring Bouqui for the winner while the runner up takes home 1000 dollars.
****There’s a long-term plan for all the contestants that stood out***