US Rapper, T.I Reveals Why He Excluded Nicki Minaj From His All-Time Top 50 Greatest Rappers

Previous: Ya’ll Pretend Like My “Osó” Album Isn’t The Best Out Of Nigeria & Africa -Brymo Brags 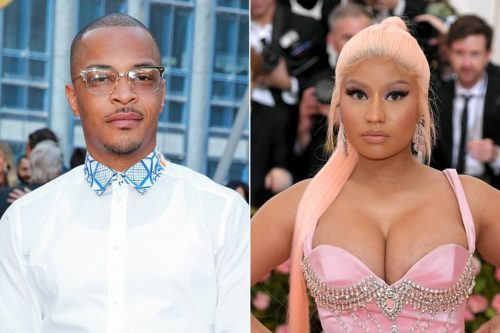 American rapper; Clifford Joseph Harris, popularly known as T.I was on his podcast few days ago and he revealed his 50 greatest rappers.

The American act who has an identity for not always shying away from his opinion on certain situations no matter the consequence named his 50 greatest rappers and he shockingly ommitted Nicki Minaj. T.I’s list has brought a lot of criticism his way as many Hip-Hop artiste believe he ommitted Nicki from the list just based on mere hatred and jealousy. However without showing any signs that there was an error in his list, T.I explained why he did not put the “Megatron” rapper on the list on another episode of his podcast and instead opted from Lil Kim.

And he said; “It’s between Lil’ Kim and Nicki [Minaj],” said T.I., addressing his friends and peers in the room. “I don’t think we can have both because they are a direct reflection of one another.” Somebody chimes in and says that without Kim, Nicki would not be able to do what she does today and Tip agreed with that sentiment. He continued: “She [Nicki] is one of the biggest-selling artists of all time and I salute that. Impact, impact, impact.”