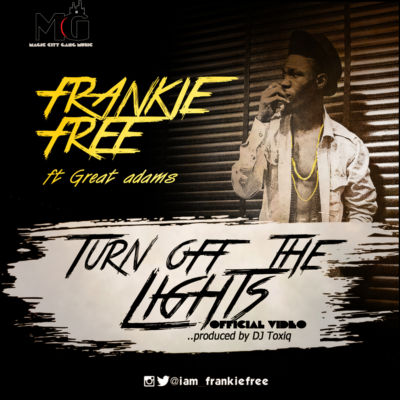 From zero to hero, the former bell-ringing fable of Wasbar Records, Frankie Free, has developed over the years and remains valid as he’s stringed up a record of events within the Nigerian music industry from the release of his mixtape a couple of years back to working with notable artists on the Nigerian music scene and also becoming quite a symbol under Pasuma Wonder‘s (the Fuji legend) record label; putting in work could be seen as a guideline path of thoughts/action for Frankie Free and he never softens or yield to pressure and/or challenges faced as we see with the release of the visuals to his second official single which was released under Wasbar Records, the DJ Toxiq–produced offering titled “Turn Off The Lights.”

With ties officially cut off between Wasbar Records and A021 Media, Magic City Gang Music proudly presents her budding artist, Frankie Free, with his latest offering, the visuals to “Turn Off The Lights“; with a subtle delivery from Great Adamz and finesse vocal rendition driven home by Sharon Johnson, all complemented by DJ Toxiq‘s excellent instrumentation, this easily adds up to your favorite play-list and is definitely the fan’s delight.

Directed by Dele Ishola Visuals, we should expect to see a few works in place as Frankie Free is set to shine under his new label imprint, Magic City Gang Music; watch and share your thoughts.