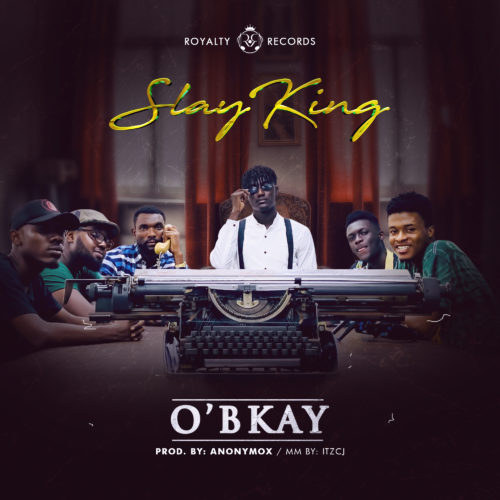 Royalty Records sensation O’Bkay who released his new single “Slay King”. O’Bkay is one of the greatest lyricists in Ghana. O’Bkay is officially the hottest thing in popular music. His popular single, “God Sent” is being sung by fans of all age groups, and his loyal followers can’t get enough of his tongue-twisting rhymes.

In October 2019, He signed an international record deal with Royalty Records. With a strong team and outstanding talents

O’Bkay, born Obeng Francis Kumi; 9th May 1993, is a Ghanaian Rapper, musician, composer, entertainer. Often found rapping/performing in his native dialect Twi, as well as English and “pidgin” language. O’Bkay does diverse genres of music but with a core focus on Hip-hop and Afrobeats. He emerged to the limelight during the “MTN Hitmaker 5 Show”, having to come out as the 3rd runner up and leaving a big impact with amazing and thrilling weekly performances.

O’Bkay has featured on major musical platforms throughout his career and has graced stages side by side with a lot of A list and B list artistes in Ghana. He has received major recognitions from Ghanaian industry moguls such as Jay Foley, D-Black, and Sarkodie, where he was called forth by Sarkodie in 2018 to be part of a timeless record (Biibiba) and performed with Sarkodie during Rapperholic Concert in 2018. O’Bkay has through his years worked with top music producers in Ghana such as Kaywa (Highly Spiritual), Fortune Dane, Kuvie, Magnom, TwoBarsGH, Samsney, ItzCJ MadeIt, Seshi, etc.

The musical sensation (O’Bkay) is set to take the world by storm with his style, versatility, performances, and craft. As the trend of Afro-pop, rap continues to make waves in and around Africa. O’Bkays “Slay King” is a refreshing one prepared for the anticipation of his next project.

The song was produced by Anonymox. Mixed and mastered by skilled sound engineer ItzCJ