Was Duncan Mighty’s Comeback The End Of Shaku Shaku ? 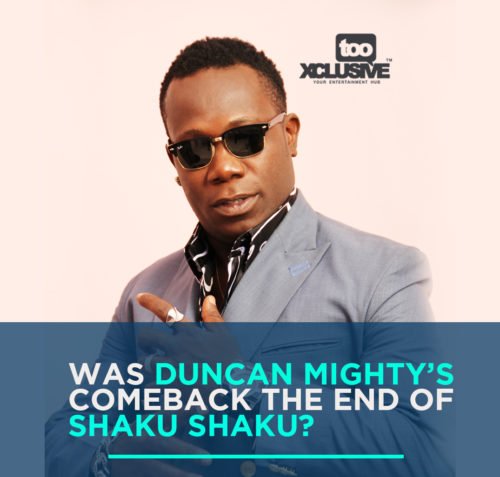 It’s a known fact that our music industry has always survived on trends (from slangs to sound & dance). Towards the end of 2017 the music industry experienced a new sound and dance which is the Shaku Shaku vibe, this Shaku Shaku was introduced by Slimcase, Mr Real and Idowest with their Legbegbe, and Omo Shepeteri songs and since the acceptance of this songs almost every artiste tapped into their sound and started featuring them on songs. Slimcase and Mr Real got the real deal as they both became the newly featured artiste.

Around May 2018, Starboy introduced Duncan Mighty’s sound back as he teamed up with Wizkid on the song Fake Love which became a big deal in the music industry. Duncan Mighty, brought back his unique sound just when people were looking for a reason to move on from the shaku shaku trend. Believe it or not, people’s interest in the shaku shaku diminished the minute they heard the sound and vibe Duncan Mighty gave fake love and started playing attention back to his sound, even artists themselves had to tap into wene Mighty’s vibe has most went to him for possible features.

Since Duncan’s comeback he has gotten numbers of featured masterpiece to his name from Bio Bio (Reekado Banks), Lova Lova (Tiwa Savage), Gimme Love (DJ Xclusive), Aza (Davido x Peruzzi) to Flenjo (Lil Kesh) amongst other incoming, which all have killed the Shaku Shaku trend and earlier features of Slimcase & Mr Real.

We all know the shaku shaku trend is dead, But Do You Think Duncan Mighty Killed It?. Share your opinion in the comment section below.