Previous: Naira Marley Trolls Simi Again, Warns Artistes That Feel They Are Bigger Than Others
By Festus Oluwole | Apr 27, 2019 | 16:18 - Leave A Comment 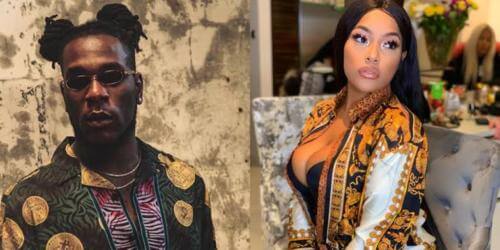 Burna Boy and girlfriend; Steflon Don are really having a good moment together as a couple as well as experimenting and seeking adventures together in places that suit their fantasy.

The two lovebirds were seen at a stripper’s club in the United States yesterday raining thousands upon thousands of dollars on stripper’s who were getting them really entertained with their sexual and sultry display.

It is good to have the knowledge that both lovers have a working relationship and an understanding of the fantasies of each other and how well they have been able to come to a mutual agreement on them.

It is quite well known that it’s not all women that can stand the effontery of their lovers having great pleasure as a result of looking at the sexual display of another woman.

Burna and Stef’s relationship was made known to the public earlier in the year when a video of the British female singer and rapper sleeping on the chest of the “African Giant” got its way to the internet.

Aside that, both singers have been seen hanging out together on numerous occassions as well as Burna speaking of the sexy curvy singer in a romantic fashion in his interviews.