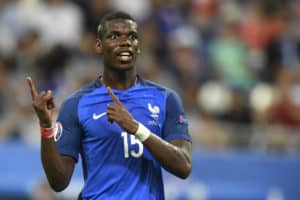 When we said that Nigerian music has gone global, some thought we were over-reaching. Paul Pogba was celebrating his team’s world cup triumph at Russia and guess what, he chose to celebrate by dancing our very own shaku shaku dance to one of Skales’ song.

International soccer star, Paul Pogba was in celebratory mood yesterday after his team won the 21st FIFA World Cup. In a post-match reaction, Pogba did a bit of the shaku shaku dance to a song titled “shaku shaku,” on which Skales featured DJ Prince.

Skales shared the video of dancing to his song on his Instagram page and sent his congratulatory message to the World Cup winner.

“Watch Paul Pogba Celebrate World Cup Win With Shaku Shaku Dance”, 5 out of 5 based on 1 ratings.