Which Has Been The Maddest Beef So Far In The Nigerian Music Industry? 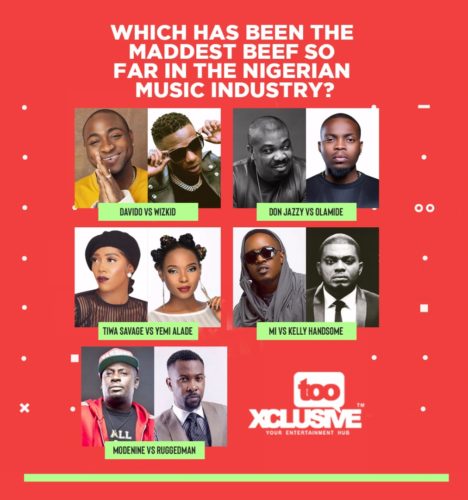 The Nigerian music industry has never shied away from hateful and spiteful relationships amongst its musicians. Years have passed that have experienced various ‘beefs’ between two artistes and it’s never showing signs that even in the coming years, these they will end.

Whether it’s a battle of supremacy or superiority over wealth and riches, quality of music or other factors, there is always going to be the existence of bad-blood among two or more music artistes in the Nigerian music scene. Some of these ‘beefs’ always shake the whole industry and even cause fans to go against each other both on the internet and outside of it. That’s how serious ‘beefs’ can go in the Nigerian music Industry.

However, the inspiration that brought about the idea of talking about beefs in the Nigerian music scene is also the one that has propelled us to look at the history of beefs in Nigeria and also to ask you guys which has been the most famous and grievous so far.

Which has been the maddest beef so far?

Davido VS Wizkid: Arguably the most popular beef in the history of Nigerian music. These two guys have been at loggerheads since they both established themselves as the biggest music exports of Nigerian music some years back. Even their fans have not been left out in their beefs as they always like to create arguments to establish who is superior between the two. Although there have been moves to always bury the hatchet by the two superstars like they did when both artistes performed at eachother’s concert in Lagos in December of 2017, the beef still finds away to resurrect. There are even words on the street that both artistes are currently not on talking terms.

Don Jazzy VS Olamide: After Reekado Banks won the highly coveted Headies Next Rated Awards over Lil Kesh and Kizz Daniel at the 2015 Headies Awards, Olamide went on stage when Adekunle Gold won an award to vent his frustrations as he claimed Lil Kesh was most deserving of the award and not any other person. In his words he said ” Adekunle let’s be honest, this award belongs to Lil Kesh because Lil Kesh is our next rated” He further added, “Every f***ing single was a hit back to back, from “Lyrically” to “Shoki” to “Efejoku” ko ni dafun iya anybody.” After these words, Olamide angrily slams the microphone on the floor and walked off.

Meanwhile, when Don Jazzy had the chance to go on stage to make a speech, he threw a shade at Olamide by telling him if it is the car that Reekado won that he so wishes to have, he should come and pick it up (A car is always given to whoever wins the Headies Next Rated Award). The Don in his words said; ” Erm…Egbon Olamide, erm….if you want the car, come and collect it.” After Don Jazzy’s speech, Olamide and the Don went on a Twitter spree as they both exchanged words.

Tiwa Savage Vs Yemi Alade: This could probably pass for the biggest female beef the music industry has ever experienced. Both Yemi Alade and Tiwa have been slotting it out for the position of the number one female musician in the nation and the continent in general. Yemi Alade has tagged her self “Mama Africa” while Tiwa has tagged herself “Number 1 African Badgal” which has further fulled their rivalry and their battle for supremacy. Even just recently, there was a feud between them after Yemi wrote on her Instagram page saying Tiwa’s  body shape is not as she portrays it to be. She said she even wears something to make her ass look attractive. Seeing her post, Tiwa reacted by posting some of her pictures showing her shapes and curves to downplay Yemi Alade’s claims, this resulted to exchange of words between the two songstresses’ fans.

MI VS Kelly Handsome: Touted also as one of the most popular beefs ever experienced in the Nigerian music terrain, both MI & Kelly were up and coming artistes as at the time their beef kick-started. It was a time when Kelly Handsome was really at the top of his game after dropping series of hit songs while under Kennis Music and MI was really making some serious waves too as a result of his rap prowess. The cause of their beef till today is relatively unknown but it was one that caught the attention of many in the industry.

Modenine VS Ruggedman: These artistes are two of the greatest rappers Nigeria has ever produced. The start of their beef could be dated back to when Modenine released “Death Blow pt1” a song on Modenine’s album “Paradigm Shift” which was released in 2008 that contains lyrics that were mostly shades directed at Ruggedman. On hearing this, Rugged quickly addressed the issue on his “Ruggedy Baba” album, calling for a confrontation from Modenine instead of him hiding behind his songs to throw shots. The beef was really a hit and definitely a contender for the maddest ever beef in the industry.

So with all these… written above, which do you think has been the maddest beef so far in the Nigerian music industry?

“Which Has Been The Maddest Beef So Far In The Nigerian Music Industry?”, 5 out of 5 based on 2 ratings.

Nifemi is a graduate of the University of Lagos. He's a unique user of the pen when it comes to the expression of whatever. He is editor-in-chief of the organization and also a writer of news, articles, editorials and a lot more to help expand the level of knowledge of the readers and simultaneously have them entertained. A lover of music and football is who he is and a Man Utd die-hard.
Submit your comment
20 total pingbacks on this post