“Godwin” vs “Wetin We Gain”… Which Is A Bigger Song? 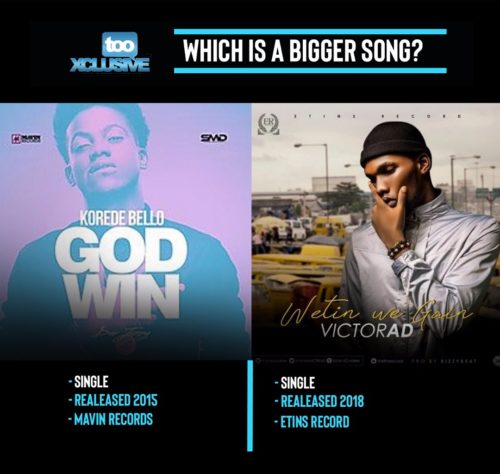 “Godwin”  and “Wetin We Gain” are two very massive debut singles for Korede Bello & Victor AD respectively. While “Godwin” is a more ancient song than the one it’s being compared to here, some people are still of the opinion that it still creates more buzz than “Wetin We Gain” when played which in turn means it’s a bigger song.

However, many others feel it is an out-rightly wrong opinion as “Wetin We Gain” is a bigger song due to its acceptance all over the country. But over here,we don’t know which side to fall on so we have decided to ask you guys, Which is the bigger song of the two, “Godwin” or “Wetin We Gain”?

Nifemi is a graduate of the University of Lagos. He's a unique user of the pen when it comes to the expression of whatever. He is editor-in-chief of the organization and also a writer of news, articles, editorials and a lot more to help expand the level of knowledge of the readers and simultaneously have them entertained. A lover of music and football is who he is and a Man Utd die-hard.
Submit your comment
25 total pingbacks on this post
VIDEO OF THE WEEK