Which Nigerian Artiste Will Be The Next To Sell Out The London 02 Arena? 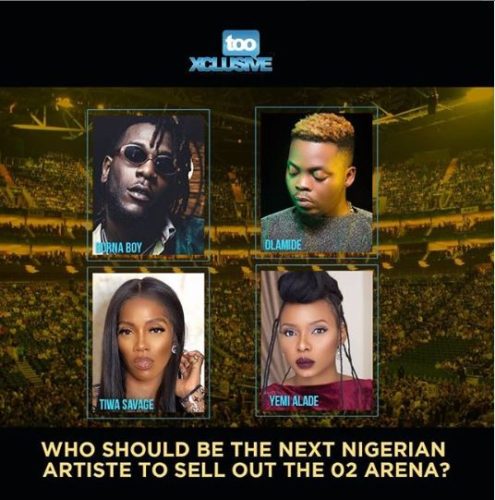 Our Nigerian music artistes are really doing Africa proud with the series of dope jams that they constantly release and the shows they sell out worldwide. They have been projecting the fact that there are lots of amazing talents in the Nigerian music Industry and really pushing the music culture to the world.

The two prominent artistes that have really been putting Africa on the map are Davido and Wizkid. These guys through their resourcefulness, hardwork and talents have helped to become efficient ambassadors, they have both sold out shows in big events hall all over the world.

Up till today, the biggest shows that both have ever done is in the UK, the London 02 Arena. Wizkid sold out the 02 Arena on the 25th of May, 2018 and Davido just did last night, 27th of January, 2019. Since both artistes have now shut down the 02 Arena, the argument has now come out about which Nigerian artiste could sell the 02 Arena next among Burna Boy, Tiwa Savage, Olamide & Yemi Alade.

So we would like you guys to intervene too.

Burna Boy, Tiwa Savage, Olamide, Yemi Alade – Who do you think will be the next artiste to sell out the 02 Arena?