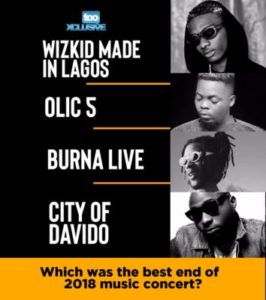 2018 surely had a spectacular ending in terms of musical concerts staged by 4 of Nigerian music superstars. Fans were treated to beautiful music showmanship across the concerts of Davido, Wizkid, Burna Boy & Olamide.

They were all top class concerts which fans thoroughly enjoyed, but we certainly understand that you guys will have your favourite amongst the 4 concerts, and that is why we are throwing the question to you……….. Which is your best of the 4 music concerts?

“WIZKID MADE IN LAGOS”

This was one of the most anticipated concerts of the year and it was staged at the Eko Atlantic city of Lagos state on the 23rd of December, 2018. The show was reported to have over 40, 000 fans in attendance.

Wizkid delivered amazing music performances alongside his friends in the industry. The likes of Teni, Chinko Ekun, Duncan Mighty & many more were present, and fans really had a good time

Olamide’s 5th edition of the OLIC was staged on the 23rd of December, 2018 at the Eko Convention centre in Lagos. Having shared the same date with Wizkid’s concert, people feared for Olamide’s concert prior to the night of the event as they thought wizkid will have all the fans of music at his concert.

But against all odds, Olamide’s concert thrived and had a large number of crowd present. There were music performances from Olamide himself, Phyno etc.

Burna Boy’s concert was tagged by many as the most anticipated music concert of the year as a result of the outstanding outing he had musically in 2018.

Burna’s concert was staged at the Eko Convention Centre in Lagos on the 26th of December, 2018, and it had performances from Burna and his industry friends. The likes of Davido, Wizkid, Wande Coal, legendary 2baba, D’Banj and many more dished out thrilling performances to the ever excited and energetic audience.

it was surely a night of bliss.

Davido brought out his industry friends in Burna Boy, Reminisce, Runtown, 9ice, Falz and a lot more. The biggest highlight of the night was Davido’s grand entrance which left many in awe of the creativity.

He also brought out his two beautiful daughters and his girlfriend. He as well blessed two fans with one million naira each on the same night.

For those who had an experience of these shows or got details about them, of the 4 music concerts which was your best?