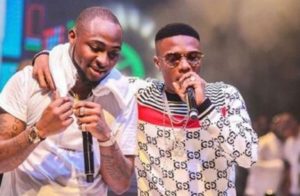 Davido took a moment to celebrate his colleague Wizkid while claiming one of the three awards he bagged at the recently held 2017 SoundCity MVP Awards. He referred to the Starboy as his brother and went on to praise him for putting Africa on the world map. The singer went on to praise other giants in the African music industry including Olamide, D’Banj, 2Baba and P-Square.

Davido created one of the standout moments of the event with his speech. He so passionately poured out his love for Wizkid and a host of other artistes who he acknowledged their efforts to globalize the African sound. The singer left moments for music lovers to enjoy for a longtime to come.