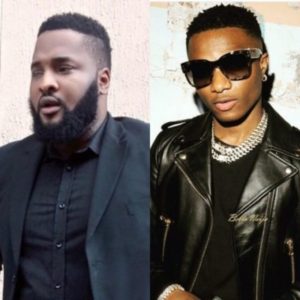 You would recall we brought you news of Wizkid’s body guard; Roy Emmanuel Obinna popularly known as Roy, being a victim of serious facial injuries from a sad event that occurred at DNA club in Lagos on the 17th of November, 2018.

Well, the issue has now been taken to court. The issue which has to do with Roy sustaining an injury and Wizkid owing the Lagos night club the sum of 8 million naira, and also a pool party bill of 7 million naira has been taken to an Igbosere Magistrate Court in Lagos, according to reports.

The court made the revelation of Wizkid’s debt during the arraignment of the chairman of Poshhills Entertainment; Olufemi Olusanya popularly known as Femi Posh and the bouncer that reportedly stabbed Roy.

Reports from Vanguardngr suggests that Roy was reportedly beaten at the time he was making attempts to settle Wizkid’s 15 million naira debt. Afari and Posh who are 29 and 38 years of age respectively, are facing a three-count charge of conspiracy, unlawful assault and grievous bodily harm.

During the arraignment of Femi Posh and Afari, the police prosecutor; Inspector Joseph Jimoh, said to the court that the offences committed are punishable by law under sections 411, 173 and 245 of the criminal laws of Lagos State 2015.

The duo however pleaded not guilty to the charges leveled against them, their lawyer; D. Mustapha, pleaded with the court to liberally make a ruling that will see the two enjoy the benefits of bail as the issue is already being taken care of internally, adding that the complainant’s medical bills is already being attended by his clients.

Apparently the magistrate by name Y.O Aro Lambo, who stood-in for Magistrate O.O. Oshin, granted the defendants bail in the sum of 500,000 naira each.

The case has now been adjourned till next year, precisely the 17th of January, 2018.