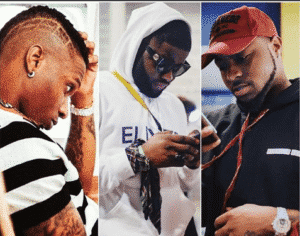 Baseline records artiste, Skales has made a revelation about the influences of Davido and Wizkid on his art. He mentioned the two music stars among those who inspire him.

During an interview with DJ Edu of BBC, on Wednesday June 13th, 2018; Skales revealed that he is inspired by Wizkid, Davido and other Nigerian artistes doing exploits and “putting the country on a different level.”

Skales also spoke about other influences on his music and he said, “listening to musicians in other parts of the world gave me the exposure that I needed and made music more interesting to make.”

Speaking on the drive behind his craft, Skales revealed that his passion for music is the primary force behind his craft and not necessarily money, although he stressed the importance of money in servicing a team as an artiste. He said, “music is not all about making money for me, honestly, I do this for the love even though I have a team that has to eat so I have to be innovative with it. It’s very fun and inspiring because I am inspired by my own story.

Recall that Skales, at some point, spoke about his connection with US rapper, Nicki Minaj. The singer spoke on the subject during the interview. He said, “I was just chilling in London last year and I saw an Instagram post from Nicki Minaj and I was like wow.“

Skales was tempted to take credit for leading the penetration of Nigerian music into the International market but the singer instead sang the praises of his contemporaries: Wizkid and Davido. “It’s not only me, I won’t take all the credit, I’ll have to (say) big up (to) everybody from Wizkid to David, people that have been putting the country on a different level, raising the bar high. I want to give a big shout out to them, they inspire us,” he said.

Speaking on his forthcoming album, Skales said the album will no longer be released on June 22 as announced earlier, adding that it would be held back for about a week or two.