Previous: I Am A New Kind Of Crazy – Dance Hall Artiste, Marcykeyz Reveals On ‘Fresh Face’ 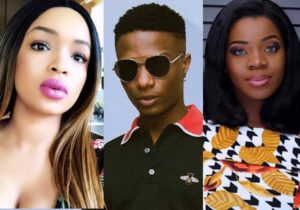 Starting today’s gist session is the seemingly brewing friendship between two of Wizkid’s baby mamas. The duo of Shola Ogudu (Wizkid’s first baby mama) and Binta Diamond (the second) seem to have developed a friendly relationship, much to the surprise of the general public. The two mothers have been exchanging friendly comments on social media.

Meanwhile we are loving how #Wizkid babymama’ Shola and Binta are getting along just fine! ??

Ruggedman has taken his social advocacy to a new level. The rapper has been vocal about the illicit activities of SARS officers around the country. The men in black have become infamous for brutalising and killing innocent Nigerian youths. The situation is worsened by the fact that some criminals have been impersonating SRAS officers to carry out these dastardly acts. Ruggedman has linked up with top ranked SARS officers to enlighten the public on how to identify SARS officers. The rapper shared a video to this effect.

So back to my mission with the new OC SARS Lagos state ,CSP Peter Gana. He said a lot of people have been impersonating and carrying out terrible acts as sars officials and he showed me how to spot fake sars. So I thought to share them with my people. 1. The real sars have a Red scorpion on their cap and jacket with the number 039 on them. 2. Sars units are only allocated 2 riffles. So any group of alleged sars officials you see with more than 2 riffles are fake. I then told him that 1. Without a proper uniform, anybody (including armed robbers) can buy black t-shirts and print sars on them. 2. They need proper mode of identification e.g. name/number badge to make tracing their station easy. 3. Since they are a special unit with so much negativity around them at the moment, it’s best to get them off the streets for now (unless when a special crime is happening) because the brutalisation, extortion, kidnapping and unlawful arrests of innocent Nigerians is too much. We don’t have a problem with them dealing with confirmed criminals, but treating innocent Nigerians like animals is turning the country into a ticking time bomb. If you fall victim to the rogue officials, if a video is impossible just try to get a good picture of one of them. Then dm me or call CSP Chike, PPRO, Lagos – 07065246927; CSP Dolapo, ZPPRO, Onikan – 09071555555 and CSP Peter Gana, OC FSARS Ikeja- 08033119661. Just like us, he is also tired of the police impunity. While we wait to see the difference the new OC Sars has promised, the #Endsars campaign is here to stay until our demands are met. @segalink @iheanachorifeanyiomut @aleeygiwa @chikeotigodwin @gbenga_sars @yomisarsoga @tundeednut @instablog9ja @amnestynigeria VIDEO CREDIT: @stamfordishoot Thank you @solarfaj @dopetv.ng @chygoz101

Not everybody will understand your moves, but as long as it’s a positive one keep it going. What will become of our nation if we all give up hope? Instead of joining the hopeless wagon, I choose to do what I can to help. If you fall victim to the rogue officials, if a video is impossible just try to get a good picture of one of them. Then dm me or call CSP Chike, PPRO, Lagos – 07065246927; CSP Dolapo, ZPPRO, Onikan – 09071555555 and CSP Peter Gana, OC FSARS Ikeja- 08033119661. @segalink @iheanachorifeanyiomuta @aleeygiwa @chikeotigodwin #playyourpart #contributeNotDisrupt #NigeriaComesFirst

And the juiciest of the gists is the fact that two of Port-Harcourt’s finest artists, Burna Boy and Duncan Mighty, have a collaboration in the pipe line. The two singers who have two distinct singing styles are capable of creating magic which explains why the anticipation of their collaboration is at sky level.

Listen to this studio vibes from #burnaboy x #duncanmighty

“Wizkid’s Babymamas Team Up, Burna Boy Link Up With Duncan Mighty”, 5 out of 5 based on 1 ratings.