Yahoo Boys Are Still ‘Mugus’ To The Whites – Seun Kuti 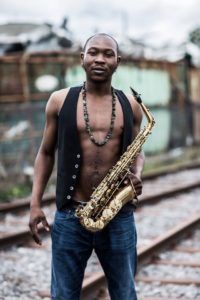 Reacting to the ongoing conversation about internet fraud (yahoo yahoo) and its rampancy in Nigeria, Seun Kuti, one of Fela’s sons, has come out to share his view on the topic and he opines that yahoo boys are still fools to the whites.

Internet fraud is rampant in the country today and a lot of youths indulge in the act. The government, through the law enforcement agents, has declared war against fraudsters and it was reported that officers of the Economic & Financial Crimes Commission recently picked up some suspected fraudsters at a Lagos club. The news sparked a social media debate as to the impact of internet scams on the Nigerian society.

Seun Kuti who is known for his activist views has joined in the conversation and his angle is completely different from the popular one. Seun makes a critical social media post about yahoo boys , questioning the ways they choose to spend the illicit riches that they acquire. In his statement, he did not condemn the act neither did he justify it but he lampooned yahoo boys and referred to them as ‘mugu’ (fools) to the whites.

‘Wetin yahoo boy dey take money do? No be to buy expensive white man things? Lol. If they weren’t busy buying White man drink but building their communities maybe just maybe, I will see dem but I don’t. Steal white mans money and the only way u can express that wealth is to seek validation by consuming the most expensive white man things and u say u are a Gee? All Yahoo boys are Mugus for whitey still, dem be learner. Wait that 100k u used 3 months to set the job how long did it take Gucci to collect it back? MUGU. Until we can express our success outside of white validation thru their brands and luxury items of status and class. U STILL BE MUGU,’ he wrote. 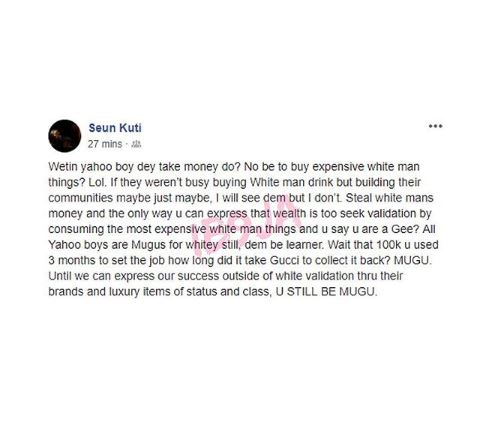